Clarifying the role of magnetism in high temperature iron-based superconductors

A collaboration of researchers from Osaka University (Prof. Tajima’s group at Department of Physics, Graduate School of Science), the RIKEN SPring-8 Center (Dr. Baron’s group), the Japan Atomic Energy Agency (Dr. Machida’s group), and the Japan Synchrotron Radiation Research Institute (Dr. Uchiyama’s group) have succeeded in measuring precisely the phonon dispersions of a parent compound of iron-based superconductors by using a high resolution inelastic X-ray scattering facility at SPring-8. The research, just published as a Rapid Communication in Physical Review B, gives us a better understanding of the atomic scale behavior of these materials, clarifying the role of magnetism in a new type of high-temperature superconductor. The first author of this paper, Naoki Murai is a graduate student of Osaka University and a Junior Research Associate of RIKEN.

It is known that the phenomenon of “superconductivity” --- where materials conduct electricity without resistance --- arises when two independent electrons form a pair. In conventional superconductors, this “pairing” arises due to the interaction between electrons and vibration of atoms in materials. But this is not always the case. There are other types of superconductors such as cuprates discovered in 1986 and iron-pnictide superconductor discovered in 2008, where magnetism may play a pivotal role in the pairing mechanism.

The question was how the atomic vibrations in the iron pnictides are affected by magnetism. This was especially interesting because atomic vibration is a driving force of the older type of low-temperature superconductors, while magnetism is considered to be the probable driving force of the new high temperature superconductors. Thus, in some sense, it was an overlap of the old with the new.

Using a technique called inelastic X-ray scattering and specially prepared single-domain crystals, the researchers were able to observe the split of X-ray scattering peaks that is an effect of magnetic order on the atomic vibration in SrFe 2 As 2 , a parent compound of iron-based superconductors. (See the figure.) From the quantitative analysis, they have clarified that the atomic vibrations in this class of materials are strongly affected by magnetic fluctuation both in the magnetic ordered and non-magnetic states. This is the first report that the information about magnetism of materials could be obtained from the measurement of atomic vibrations.

Phonon spectra of detwinned SrFe 2 As 2 crystals, as measured by inelastic x-ray scattering, show clear anisotropy accompanying the magnetostructural transition at 200 K. We model the mode splitting using magnetic DFT calculations, including a phenomenological reduction in force-constant anisotropy that can be attributed to magnetic fluctuations. This serves as a starting point for a general model of phonons in this material applicable to both the antiferromagnetically ordered phase and the paramagnetic phase. Using this model, the measured splitting in the magnetic phase below T N , and the measured phonon linewidth, we set a lower bound on the mean magnetic fluctuation frequency above T N at 210 K. 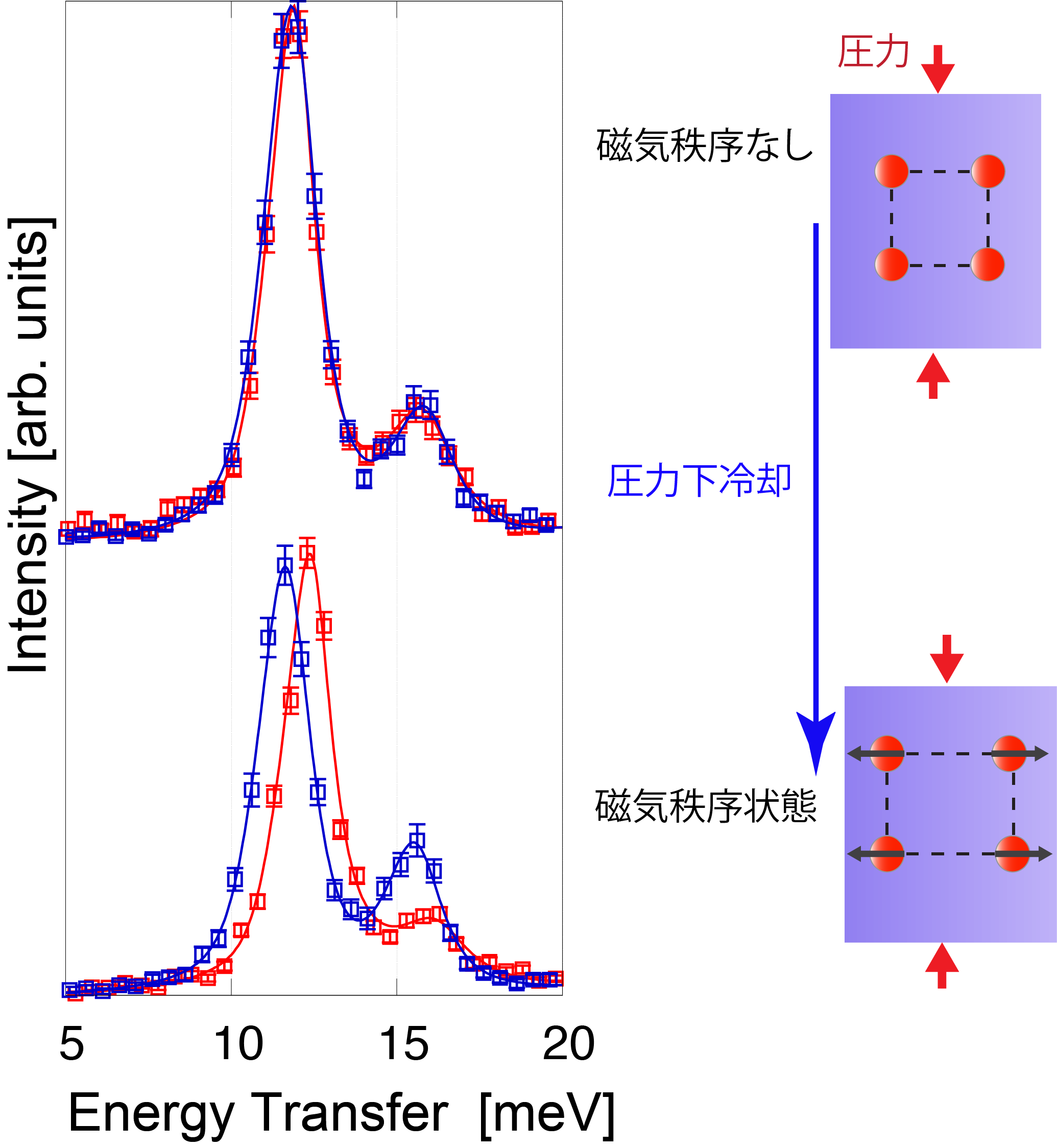 The upper curves were measured at 125 Kelvin (non-magnetic state), while the bottom curves were for 83 Kelvin (magnetic ordered state). Red and blue curves correspond to the data in different crystal directions that are perpendicular to each other. It is clearly seen that in the magnetic state the atomic vibration peaks split because the vibration frequencies become inequivalent in these two directions.

To learn more about this research, please view the full research report entitled " Effect of magnetism on lattice dynamics in SrFe 2 As 2 using high-resolution inelastic x-ray scattering " at this page of the Physical Review B website.