Reduction of SGA levels in potato breeding is considered an important goal.

A group of researchers from the following 7 institutes in Japan: (1) RIKEN, (2) Kirin Co., Ltd., (3) Tokyo Institute of Technology, (4) Osaka University, (5) Hiroshima University, (6) Nihon University, and (7) Chiba University have identified the enzyme SSR2 of the SSR2 enzyme gene in the potato as playing a key role in the biosynthesis of a toxic steroid glycoalkaloid (SGA).

It is known that sprouts and greened skins of potato contain α- solanine and α- chaconine, toxic steroidal glycoalkaloids (SGAs). Therefore, in breeding potatoes, reducing SGA levels is thought to be one of the most important issues. It has been thought that SGAs are biosynthesized from cholesterol as intermediates; however, as cholesterol levels in plants are usually extremely low, a detailed production mechanism has been unknown.

By enzyme function assessment using heterologous gene expression in yeast, this joint group identified the Sterol Side Chain Reductase 2 (SSR2) gene as an enzyme in the biosynthesis of cholesterol necessary for SGA synthesis. It was found that in SSR2-silenced potatoes and SSR2-disrupted potatoes, SGA levels were lower than those in non-recombinant potatoes.

This joint group found two types of protein genes DWF1 and DHCR24 considered to be homologs of genes expressed in potatoes and tomatoes and named them SSR1 and SSR2, respectively. In order to elucidate the functions of these genes, this group assessed enzyme functions of SSR1 and SSR2 by making use of heterologous gene expression in budding yeast. Results suggested that the SSR1 gene was involved in 24-alkylsterol biosynthesis and the SSR2 gene was involved in biosynthesis of cholesterol, intermediates of SGA biosynthesis.

By targeting the SSR2 gene, this group's findings will likely lead to the breeding of potatoes with lower SGA levels.

Potatoes (Solanum tuberosum) contain α-solanine and α-chaconine, two well-known toxic steroidal glycoalkaloids (SGAs). Sprouts and green tubers accumulate especially high levels of SGAs. Although SGAs were proposed to be biosynthesized from cholesterol , the biosynthetic pathway for plant cholesterol is poorly understood. Here, we identify sterol side chain reductase 2 (SSR2) from potato as a key enzyme in the biosynthesis of cholesterol and related SGAs. Using in vitro enzyme activity assays, we determined that potato SSR2 (St SSR2) reduces desmosterol and cycloartenol to cholesterol and cycloartanol, respectively. These reduction steps are branch points in the biosynthetic pathways between C-24 alkylsterols and cholesterol in potato. Similar enzymatic results were also obtained from tomato SSR2. St SSR2-silenced potatoes or St SSR2-disrupted potato generated by targeted genome editing had significantly lower levels of cholesterol and SGAs without affecting plant growth. Our results suggest that St SSR2 is a promising target gene for breeding potatoes with low SGA levels. 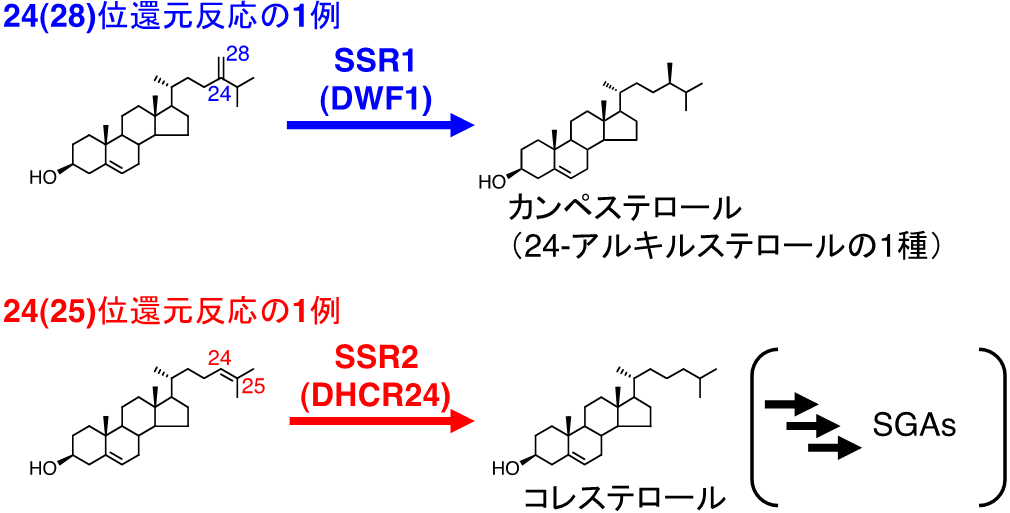 To learn more about this research, please view the full research report entitled " Sterol Side Chain Reductase 2 Is a Key Enzyme in the Biosynthesis of Cholesterol, the Common Precursor of Toxic Steroidal Glycoalkaloids in Potato " at this page of the Plant Cell website.