Successful decoding of genome of Chinese licorice, a crude drug

Licorice, the root of the leguminous glycyrrhiza plant species, is used in medicines and cosmetics and is in great demand. Licorice is contained in some 70 percent of more than 200 kinds of Chinese medicines used for general purposes in Japan. In particular, glycyrrhizinate, a triterpene glycoside accumulated in licorice, has a variety of medicinal benefits, such as improvement in hepatic function, anti-inflammatory effects, expectorant effects, and healing of peptic ulcers. It has also more than twice as much sweetness as sugar, so it is used for many foods as a natural sweetener. Glycyrrhizinate, a non-sugar sweetener, is drawing attention because it is low in calorie content and helpful for preventing metabolic syndrome.

Currently, 90 percent of doctors in Japan use Chinese medicines for treatment and the amount of their usage is on the rise year by year. However, 85 percent of crude drugs used for Chinese medicines, such as licorice, are imported from China. As the Chinese economy grows, imports are limited and prices are on the rise. In addition, as demand is domestically and internationally increasing, there are growing concerns about short supply of general crude drugs such as licorice and ephedra herb. Therefore, in order to efficiently facilitate the exploration of genes related to the breeding of licorice that has a high effective content and suitable for domestic cultivation as well as to the production of effective ingredients, decoding of the entire genome of licorice had been sought after.

This group’s results will lead to the domestic cultivation of licorice through molecular breeding, productivity gain, improvement of function as a crude drug, as well as exploration of genes useful for producing medicinal properties.

Chinese liquorice/licorice (Glycyrrhiza uralensis) is a leguminous plant species whose roots and rhizomes have been widely used as a herbal medicine and natural sweetener. Whole-genome sequencing is essential for gene discovery studies and molecular breeding in liquorice. Here, we report a draft assembly of the approximately 379-Mb whole-genome sequence of strain 308-19 of G. uralensis; this assembly contains 34 445 predicted protein-coding genes. Comparative analyses suggested well-conserved genomic components and collinearity of gene loci (synteny) between the genome of liquorice and those of other legumes such as Medicago and chickpea. We observed that three genes involved in isoflavonoid biosynthesis, namely, 2-hydroxyisoflavanone synthase (CYP93C), 2,7,4′-trihydroxyisoflavanone 4′-O-methyltransferase/isoflavone 4′-O-methyltransferase (HI4OMT) and isoflavone-7-O-methyltransferase (7-IOMT) formed a cluster on the scaffold of the liquorice genome and showed conserved microsynteny with Medicago and chickpea. Based on the liquorice genome annotation, we predicted genes in the P450 and UDP-dependent glycosyltransferase (UGT) superfamilies, some of which are involved in triterpenoid saponin biosynthesis, and characterised their gene expression with the reference genome sequence. The genome sequencing and its annotations provide an essential resource for liquorice improvement through molecular breeding and the discovery of useful genes for engineering bioactive components through synthetic biology approaches. 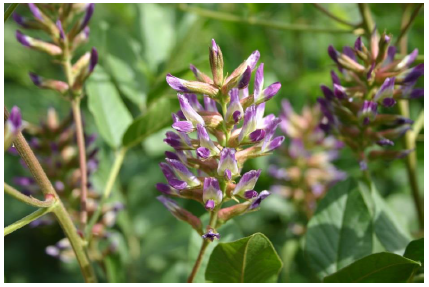 To learn more about this research, please view the full research report entitled “ Draft genome assembly andannotation of Glycyrrhiza uralensis, a medicinal legume ” at this page of the The Plant Journal website.