Multiferroics possessing properties approximating that of conventional ferroelectrics were realized

Osaka University affiliations of the members of the research team:

As properties of multiferroics can be controlled by methods different from normal methods such as magnetization by an electric field and electric polarization by a magnetic field, new devices such as magnetoelectric conversion devices have been sought after and developed in the last decade. Among multiferroics, particularly in multiferroic materials in which ferroelectricity is caused by magnetic order, giant magnetoelectric effects (drastic changes in ferroelectricity by a magnetic field) are occasionally observed.

This research group developed a measurement system for examining at 10K pressures by making use of a diamond-anvil cell and examined, under a high pressure, the details of ferroelectric properties of TbMnO 3 , a multiferroic induced by magnetic order. As a result, it was demonstrated that ferroelectricity in TbMnO 3 was 0.07μC/cm 2 at normal pressures, but at 40K or higher pressures, the value increased to an order of magnitude larger than that at normal pressures, 1μC/cm 2 . Furthermore, this enhanced ferroelectricity induced by magnetic order further, by being applied to a magnetic field, was enhanced, almost doubled, to 2μC/cm 2 . This value was nearly an order of a magnitude larger than values ever reported in spin-driven ferroelectrics.

Currently, operation has been achieved only at high pressure and at low temperatures, therefore, there are many problems remaining in moving forward in the practical use of ferroelectricity control by magnetic fields and magnetic control by electric fields. However,  ferroelectric polarization induced by magnetic order that had been thought to be far smaller than that of conventional ferroelectrics could be greatly increased by pressure, which suggests possibilities for multiferroic property control not only by electric fields and magnetic fields, but also by pressure. In the future, this group's achievement in the use of multiferroics will lead to the development of electric, magnetic, and optical materials as well as devices working on different principles. 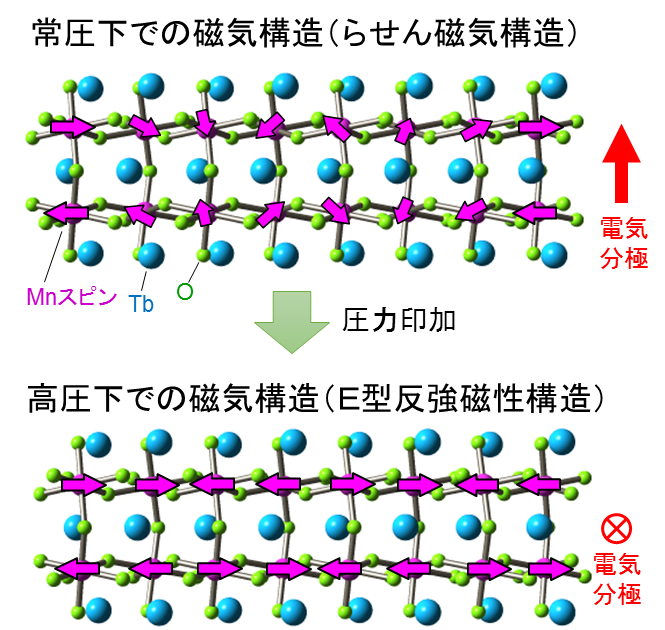 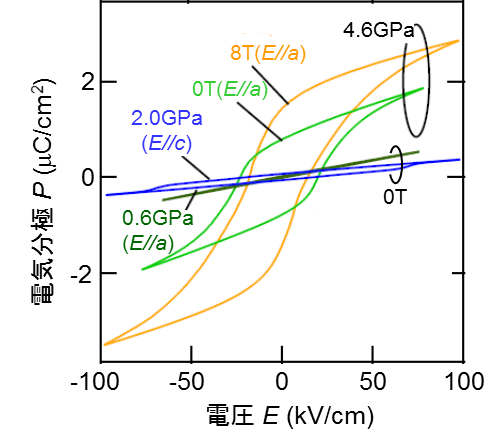 To learn more about this research, please view the full research report entitled " Giant spin-driven ferroelectric polarization in TbMnO 3 under high pressure " at this page of the Nature Communications website.