Successful fabrication of protein nanowires with a large surface area

Nanowires with aspect ratios of over 1,000

In cooperation with Dr. Atsushi ASANO and Dr. Masaki SUGIMOTO of the Japan Atomic Energy Agency, researchers at Anan National College of Technology and at Tohoku University, a group of researchers at the Graduate School of Engineering, Osaka University* succeeded in fabricating protein nanowires capable of potential use in interactions with living cells as well as in controlling and predicting biological responses. 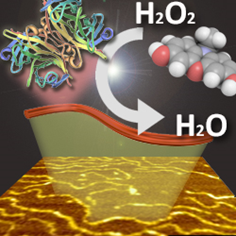 Research on protein nanostructures continues to be conducted because it is thought they can be applied to drug delivery systems, scaffolds for cell adhesion, and diagnosis of diseases. Research on the fabrication of nanostructures by making use of proteins with self-assemble properties has also been conducted. However, such fabrication methods cannot be used for proteins which do not self-assemble; furthermore, it's hard to control the size and homogeneity of nanostructures, an important property in developing drug carriers.
This group succeeded in fabricating extremely thin nanowires of uniform length and thickness by ion beam irradiation of an HSA film and inducing intermolecular cross-linking reactions of the proteins along its trajectory. In conventional processing technologies, the maximum aspect ratio was generally 4 or 5 and it was hard to standardize the length and thickness. However, this group succeeded in fabricating homogeneous protein nanowires of controlled length with a large surface area with aspect ratios of over 1,000.
This group confirmed that enzymes were quantitatively bound to nanowires with large surface areas through interactions between protein molecules or molecules strongly interacting with proteins and that they maintained enzymatic activity. The group also confirmed that it was possible to bond protein nanowires with other organic nanowires fabricated by their method. These findings demonstrate the possibility of selectively fabricating nanowires possessing a variety of chemical compositions and binding them by controlling their length. In fact, it's possible to fully regulate the amount of different enzymes and bind them to the surface of a protein molecule. Nanowires developed with this group's technique promise use in highly sensitive diagnosis of diseases. 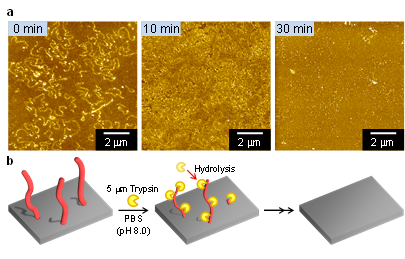 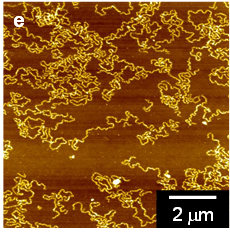