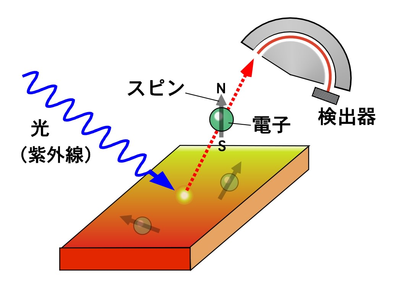 Synopsis
Under the leadership of TAKAYAMA Akari , graduate student at the Graduate School of Science, Tohoku University, TAKAHASHI Takashi , Professor, Advanced Institute for Materials Research, Tohoku University, and OGUCHI Tamio , Professor, Institute of Scientific and Industrial Research, Osaka University , a team of researchers has succeeded in clarifying a central mechanism of an effect in the creation and control of the spin-flow in spintronic*1 devices. This effect, called the Rashba Effect*2, is observed at the semiconductor-metal interface. This mechanism has drawn attention as a pillar of next-generation spintronic devices. The Rashba effect was observed by examining spin*3 states of ultra-thin bismuth film with an ultrahigh resolution spin-resolved photoemission spectrometer. This discovery opens a path for the development of semiconductor electronic devices and next-generation spintronic devices using material interfaces.
The important findings of this team were published in the April 11th issue of the American Chemical Society magazine, Nano Letters .
Background
Along with the popularization of smaller, faster, and more energy-efficient electronic information devices, researchers are engaged in active development of devices referred to as "spintronics" that make use of the new technology. Spintronics technology makes use of the magnetic properties of the spin of electrons. In spintronics, electron spin is handled in terms of binary digital information, either 1 or 0. As electrons can flow without electrical resistance and electronic spin does not generate heat in their transmission and control, power requirements can be drastically reduced. However, to realize such spintronic devices, materials used as key components must be developed. As a storage device, Magnetoresistive Random Access Memory (MRAM)* based on ferromagnetic metal with magnetic memory elements is already in practical use and expectations for computers with less power consumption are high.
On the other hand, conventional semiconductor devices have no magnetic properties, so they cannot align spin directions with electronic signals. However, recent research has clarified that there is a "Rashba effect" which changes spin direction on the surface of heavy metals in a semiconductor interface.
The Rashba effect is a relativistic effect called "spin-orbit interaction"*5, determining spin direction. The use of the Rashba effect will lead to higher speed and higher integration of spintronics devices. (Figure 1)
Rashba effect has great possibilities; however, there have been large challenges in developing devices using this effect. One challenge was that the relativistic effect was weak at the semiconductor interface in devices, thereby also reducing the Rashba effect. The other challenge was that experimental observation of electrons at the interface was so difficult that the Rashba effect had not been fully understood. In order to develop high-speed and energy-saving spintronic devices, these obstacles needed to be overcome.
Findings
In this research, the joint research group of Tohoku University and Osaka University set out to determine the state of electron spin of bismuth (Bi) metal film using a spin-resolved photoemission spectrometer*6. (Figure 2) The group created a thin Bi film on the surface of a silicon (Si) semiconductor and conducted experiments using a spin-resolved photoemission spectrometer developed by Tohoku University. (Figure 3)
The heavy metal Bi showed a strong Rashba effect on the surface and electrons showed a large spin polarization perpendicular to the direction of motion. This group determined for the first time in the world that the spin polarization of the surface electrons changes in relation to the relative thickness (or thinness) of the film. (Figure 4)
Furthermore, the group found that the electron energy state varies in accordance with the film thickness. As a result of theoretical analysis on the Bi/Si surface (at the Bi/Si interface) they discovered a Rashba effect that had the opposite spin direction from the Bi surface. (Figure 5) They also found that the size of the effect was significantly larger than the effect at the conventional semiconductor interface.
Future development
This research has experimentally indicated that the electron spin state between metal and semiconductor that had been difficult to observe had the same structure as the electron spin state on the surface. Furthermore, they also concluded that the Rashba effect observed at the interface between Bi and Si was significantly larger than the Rashba effect at the semiconductor interface and that it is possible to control the spin accurately with less electric power. Therefore, this finding will make possible more effective energy-saving and highly accurate spintronic devices. It is expected that the development of new spintronic devices making use of this giant Rashba effect at the metal-semiconductor interface will be greatly enhanced.

This achievement was obtained through Grants-in-Aid for Scientific Research (S) supported by the Japan Society for the Promotion of Science, " Electronic states of novel functional materials studied by ultrahigh-resolution three-dimensional spin- and angle-resolved photoemission spectroscopy ."(project leader: TAKAHASHI Takashi)