Instant Turn-over of Magnetism by Gyro Motion of Relativistic Electrons

Magnetic fields are detected throughout the universe and widely participate in astrophysical dynamics. Various fundamental phenomena, including coronal mass ejections, solar flares, gamma-ray bursts and pulsar winds, are dominated by variations in magnetic fields. Although the mechanisms involved in the origin of magnetic fields in space are still uncertain, one of the widely accepted plausible scenarios is the turbulent dynamo, which amplifies weak magnetic fields. Recent numerical studies and experiments with long pulse laser-produced colliding plasma flows have demonstrated the capability of seed field amplification. Coupling strong magnetic fields and high-power lasers supports cutting-edge research in laboratory astrophysics and laser-driven charged particle accelerations. With moderate laser intensities and a relatively long pulse length, mega-gauss (MG) magnetic fields in plasmas at the edges of focal spots have been achieved. Numerical and theoretical studies predict a magnetic field strength of 100 MG, while state-of-the-art experimental results are about 10 MG.

Recently, scientists at Osaka University investigated the mechanism of magnetic field growth from a weak seed field in a so-called ‘microtube implosion’ scenario and demonstrated a three order of magnitude amplification from MG- to GG-order magnetic fields via kinetic simulations [1, 2]. The obtained magnetic field strength is even stronger than that of pumping electromagnetic fields. Such high magnetic fields are comparable with astrophysical bodies like neutron stars and black holes. Besides, depending on the strength of the seed magnetic field and the target structure, the polarity of the resultant magnetic field is found to turn over instantly.

The study conducted by Yan-Jun Gu and Masakatsu Murakami has confirmed that current laser technology can realize GG-order magnetic fields based on this concept. The presented concept and theoretical scaling laws for generating GG- order magnetic fields will be beneficial to pioneering fundamental research in various regions, including materials science, quantum electrodynamics (QED), and astrophysics, as well as other cutting-edge practical applications. 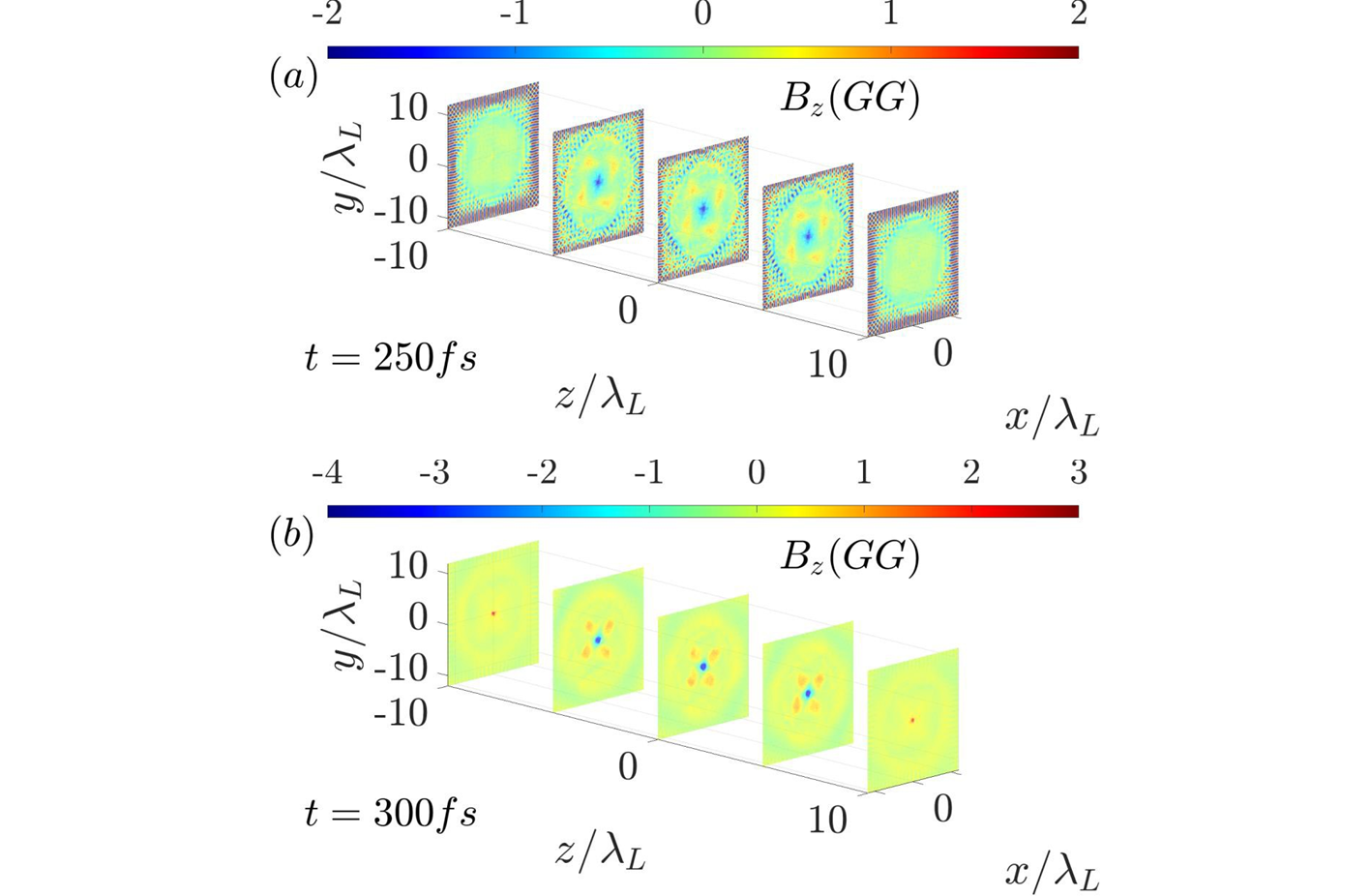 Fig.1 (a) and (b) present the evolution of the z-component of B-field in 3D space. The microtube covers a length of −10 < 𝑧(𝜆) < 10 with the inner and outer radius of 6 and 8 microns. The diffraction stripes in (a) depict the four pumping lasers from x-y sides. The magnetic field inside the microtube increases from 1 to 5 GG within 50 femto-seconds as seen in (b). The gyro motion of the electrons around the central core contributes to the significant amplification. (CC BY, © 2022 Y. J. Gu et al., Magnetic field amplification driven by the gyro motion of charged particles, Scientific Reports)