Root cause: Plant root tips are constrained to a dome shape common to arch bridges

Researchers from Osaka University, Nara Institute of Science and Technology, and Kobe University find that plant root tips are constrained to a dome shape, similar to that of an arched bridge, because of one-directional and localized tissue growth

Nature is full of diversity, but underneath the differences are often shared features. Researchers from Japan investigating diversity in plant features have discovered that plant root tips commonly converged to a particular shape because of physical restrictions on their growth.

In a study published in Development, researchers from Osaka University, Nara Institute of Science and Technology, and Kobe University have revealed that plant root tips are constrained to a dome-shaped outline because of restrictions on their tissue growth. This study is one of the papers selected as a Research Highlight published in this issue of Development that looked at how the geometric and mechanical properties of plant tissues are regulated during development, and how they contribute to growth.

In plants and animals, the outlines of organs are defined by shape and size. But despite species differences, these outlines retain a basic similarity (e.g., songbird beaks). Plant root tips are no exception, sharing a domed shape. Root tips need to be able to push through soil effectively without disintegrating, and the similarity of their shape between plant species suggests that it may be constrained by evolution.

To investigate how the shape of root tips is defined, the team used morphometric (i.e., measurements of shape and form) analysis and mathematical modeling. They looked at the shape of primary and lateral root tips in Arabidopsis – small flowering plants similar to mustard and cabbage – and other flowering plant species.

“We found that the shape of the root tips in these species commonly converged to a unique curve by rescaling their size,” says lead author of the study Tatsuaki Goh (Figure 1). “This curve can be described as a catenary curve – like that of arch bridges, or of a chain hanging between two points.” (Figure 2)

The team also revealed with simulations that, with this shape, mechanical force is evenly spread over the surface of a root tip, and propose that this may help the tip to efficiently push through the soil. Mechanically, the formation of a curve like this in a growing structure needs a distinct boundary between a growing and non-growing region at the lateral edge of the young root, as well as spatially even, one-directional (oriented) tissue growth in the growing root tip (Figure 3).

“The very young roots of Arabidopsis show both of these characteristics, and mutant strains of these plants that disrupt either of these requirements lead to a departure from the dome shape,” explains senior author Koichi Fujimoto.

Future studies could look at how localized and spatially even occurrence of one-directional tissue growth are shared constraints for the maintenance of the dome shape between different species and classes of roots and have potential applications in plant conservation and plant biotechnology. 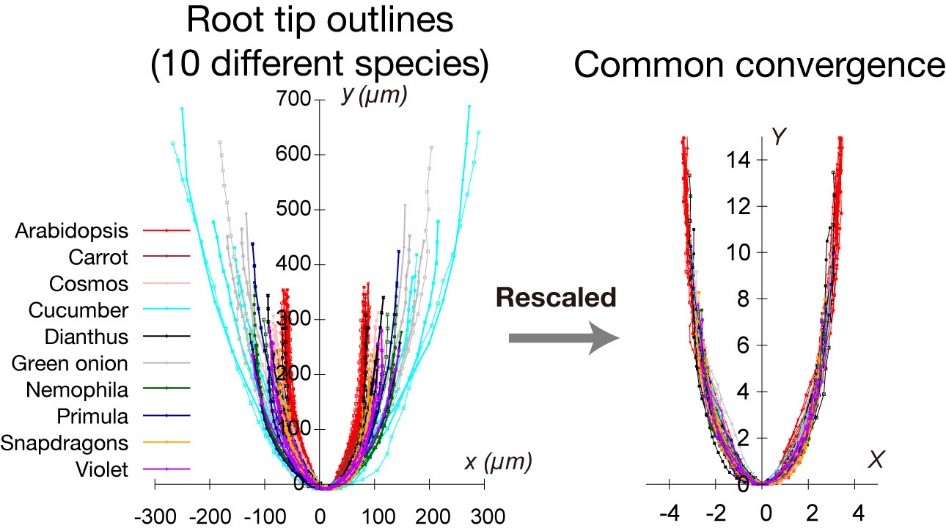 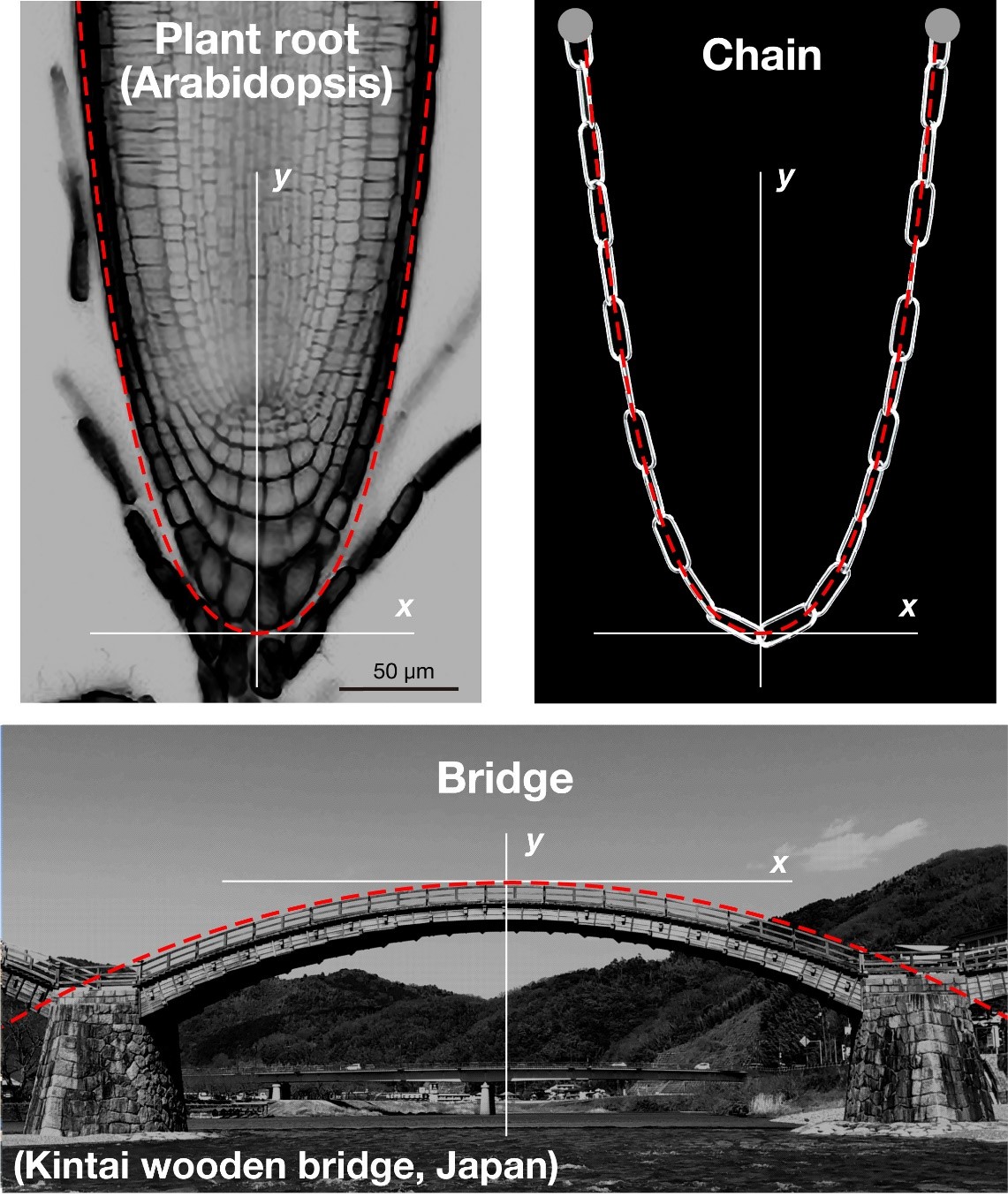 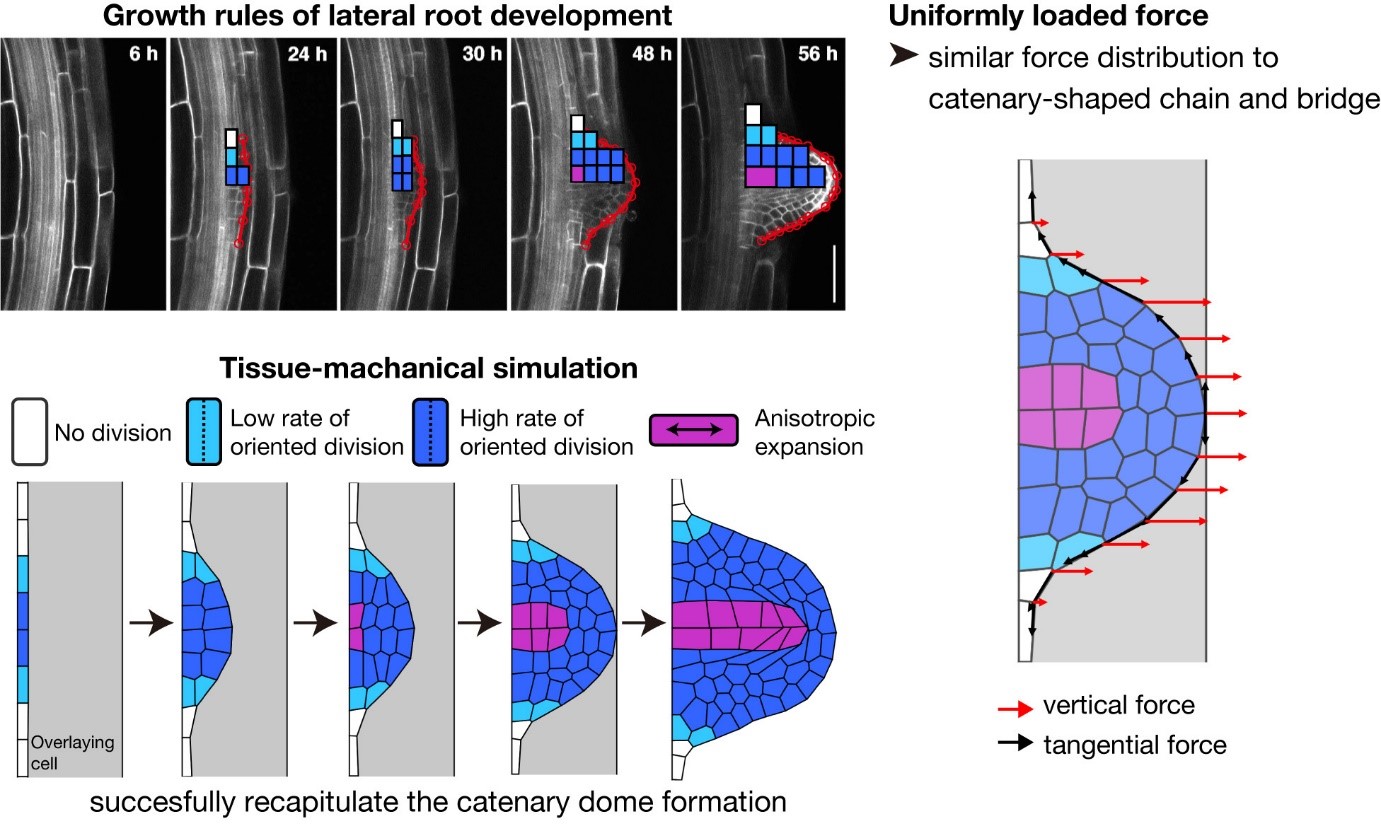 The article, “Tissue growth constrains root organ outlines into an isometrically scalable shape,” was published in Development at DOI: https://doi.org/10.1242/dev.196253.