The making of memory B cells and long-term immune responses

Only B cells that express Bach2 and reduced mTORC1 activity can become memory B cells, the body’s first responder to re-infections

The current COVID-19 climate has made vaccines, antibodies, and immune responses topics of everyday conversation. Now, it isn’t just immunologists who want to know how our bodies respond to re-infections months, years, or sometimes decades after an initial immune response. A new study by Tomohiro Kurosaki at Osaka University shows that this ability requires Bach2, a protein that regulates the expression of genes needed to instruct activated B cells under selection to become memory B cells.

Like most biological processes, immune responses are complicated. They involve numerous types of cells and proteins, performing precise step-by-step processes. And of course, we don’t know all of them yet. For example, memory B cells are a type of white blood cell that are created in lymph nodes or spleens during an infection. They stick around for years and allow rapid and strong antibody-related responses to re-infection by the same virus or bacteria. In contrast, plasma cells are much more numerous and help during an initial infection by producing antibodies, although they too can exist for long periods of time in the body. Kurosaki and his team focused their research on understanding what causes activated B cells, called germinal center B cells, to become memory B cells, plasma cells, or to be recycled.

Scientists can identify different types of B cells by markers—certain proteins—that they express. On the basis of specific markers, the researchers identified a subset of B cells that they determined were prone to become memory B cells, which they called pro-memory B cells. They then examined mice lacking the protein Bach2, a transcription factor required for memory B cell production. These mice are known to be deficient in producing memory B cells. The researchers found that the lack of Bach2 was associated with fewer pro-memory B cells and increased expression of genes related to a protein complex called mTORC1.

Understanding the process through which memory B cells are produced means that this process can be manipulated for our benefit. “Given the importance of memory B cells in protecting us against re-infection, being able to induce their production could be helpful for developing efficient vaccines that remain effective for years,” says Kurosaki. 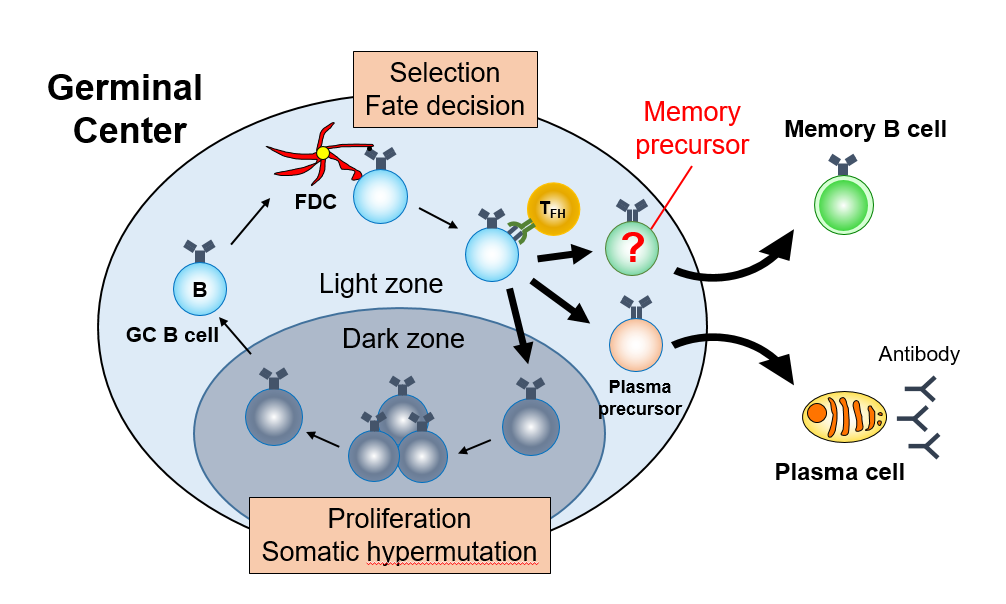 Figure: B cell differentiation in GC

The article, “Exit from germinal center to become quiescent memory B cells depends on metabolic reprograming and provision of a survival signal,” was published in Journal of Experimental Medicine at DOI: https://doi.org/10.1084/jem.20200866 .