How do you turn on and off an ultra-small component in advanced technologies? You need an actuator, a device that transmits an input such as electricity into physical motion. However, actuators in small-scale technologies to date have critical limitations. For example, if it's difficult to integrate the actuator into semiconductor electronics, real-world applications of the technology will be limited. An actuator design that operates quickly, has precise on/off control, and is compatible with modern electronics would be immensely useful.

In a study recently published in Nano Letters , a team including researchers from Osaka University has developed such an actuator. Its sensitivity, fast on/off response, and nanometer-scale precision are unparalleled.

The researchers’ actuator is based on vanadium oxide crystals. Many current technologies use a property of vanadium oxide known as the phase transition to cause out-of-plane bending motions within small-scale devices. For example, such actuators are useful in ultra-small mirrors. Using the phase transition to cause in-plane bending is far more difficult, but would be useful, for example, in ultra-small grippers in medicine.

Using a two-step protocol, the researchers fabricated a fifteen-micrometer-long vanadium oxide crystal attached by a series of ten-micrometer arms to a fixed frame. By means of a phase transition caused by a readily attainable stimulus—a 10°C temperature change—the crystal moves 225 nanometers in-plane. The expansion behavior is highly reproducible, over thousands of cycles and several months.

"We also moved the actuator in-plane in response to a laser beam," says Nicola Manca and Luca Pelligrino, co-authors. "The on/off response time was a fraction of a millisecond near the phase transition temperature, with little change at other temperatures, which makes our actuators the most advanced in the world."

Small-scale technologies such as advanced implanted drug delivery devices wouldn't work without the ability to rapidly turn them on and off. The underlying principle of the researchers' actuator—a reversible phase transition for on/off, in-plane motion—will dramatically expand the utility of many modern technologies. The researchers expect that the accuracy and speed of their actuator will be especially useful to micro-robotics. 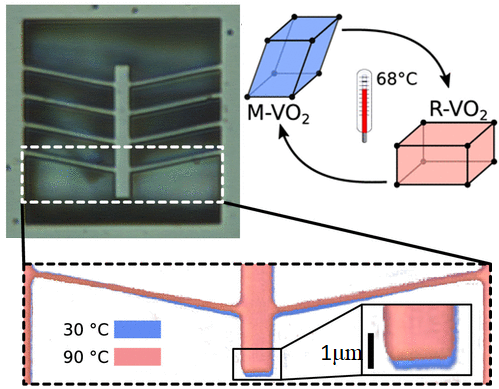 Figure 1. Bright-field microscopy image of a VO 2 chevron-type planar actuator. Superposition in false color of the tip of the shuttle at low and high temperature. Bar, 1 μm. 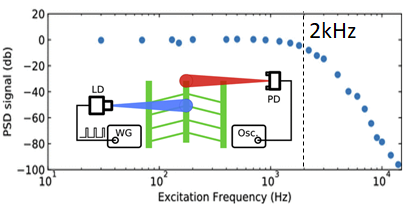 Figure 2. Illustration of the experiment: A blue laser diode (LD), controlled by a waveform generator (WG), is focused in the middle of the shuttle while a red laser spot partially covers its tip. Reflected red light is collected by a photodiode (PD) and the resulting electrical signal is monitored by an oscilloscope (Osc) and the frequency response of the device under study. Cutoff frequency, ~2 kHz. The device is thermalized at 50°C during excitation with the blue laser. We acquired data points manually, and observed no appreciable drift over time, indicating reproducibility over thousands of cycles.