Faulty transportation of messenger RNA is the culprit in ALS

As the current COVID-19 crisis has shown, the disruptions that occur when transportation cannot proceed as usual are system-wide, affecting individual lives, companies, and the global economy. Now imagine a similar problem inside your brain and spinal cord. A new study led by researchers from Osaka University and National Center of Neurology and Psychiatry reports that two common neurodegenerative diseases—ALS, also known as Lou Gehrig's disease, and frontotemporal lobar degeneration, or FTLD—result from reduced transportation of RNA by the protein TDP-43, which ultimately disrupts neuron function.

Because one of the biggest physiological changes in both ALS and FTLD is the disappearance of TDP-43 from the nucleoli of neurons, the team focused their research on finding out what TDP-43 normally does. TDP-43 is known to bind to RNA, and the team’s first experiment showed that in neurons, TDP-43 attaches to RNA that codes for pieces of ribosomes, which are necessary for making proteins from RNA code.

At its core, transportation gets things where they need to be at the proper time, whether they’re people, goods, or molecules. In the body, items being sent from one place to another are often a response to what’s happening to you. For instance, in response to dehydration, your brain sends a hormone through your blood to the kidneys where it forces water to be reabsorbed. In cells like neurons, the situation is similar, but there are no roads or arteries. Instead, many molecules get to their destination by being carried by other molecules.

“We discovered TDP-43 in axons and that it binds to ribosomal protein messenger RNA,” says first author Seiichi Nagano. “That was strong support for the idea that TDP-43 carries the RNA to the axon where it can be used to make ribosomal proteins. This would allow local synthesis of proteins at ribosomes built in axons.” Indeed, further experiments confirmed that hypothesis and showed that when TDP-43 was missing, the RNA in question could not be transported to the axon.

But what happens if the RNA cannot be transported? The researchers examined axon growth in culture as well as in mouse embryos. They found that in both cases, axon extension and outgrowth were stunted when TDP-43 was missing. However, outgrowth could be restored by forcing the neurons to overproduce ribosomal proteins.

“Now that we understand TDP-43’s role in transporting the ribosomal protein messenger RNA, it should help us develop new strategies and new targets for ALS and FTLD treatments,” says co-author of the study Hideki Mochizuki. “Our results in reversing stunted axon extension in mouse embryos is promising, but is just a first step.” 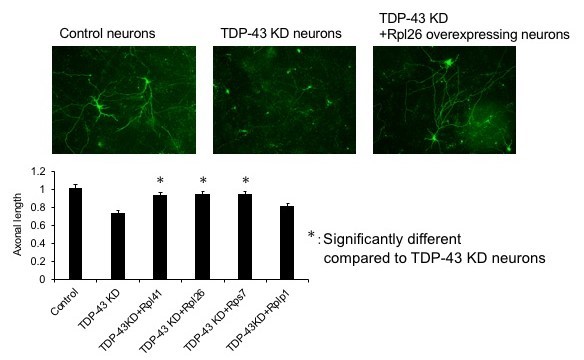 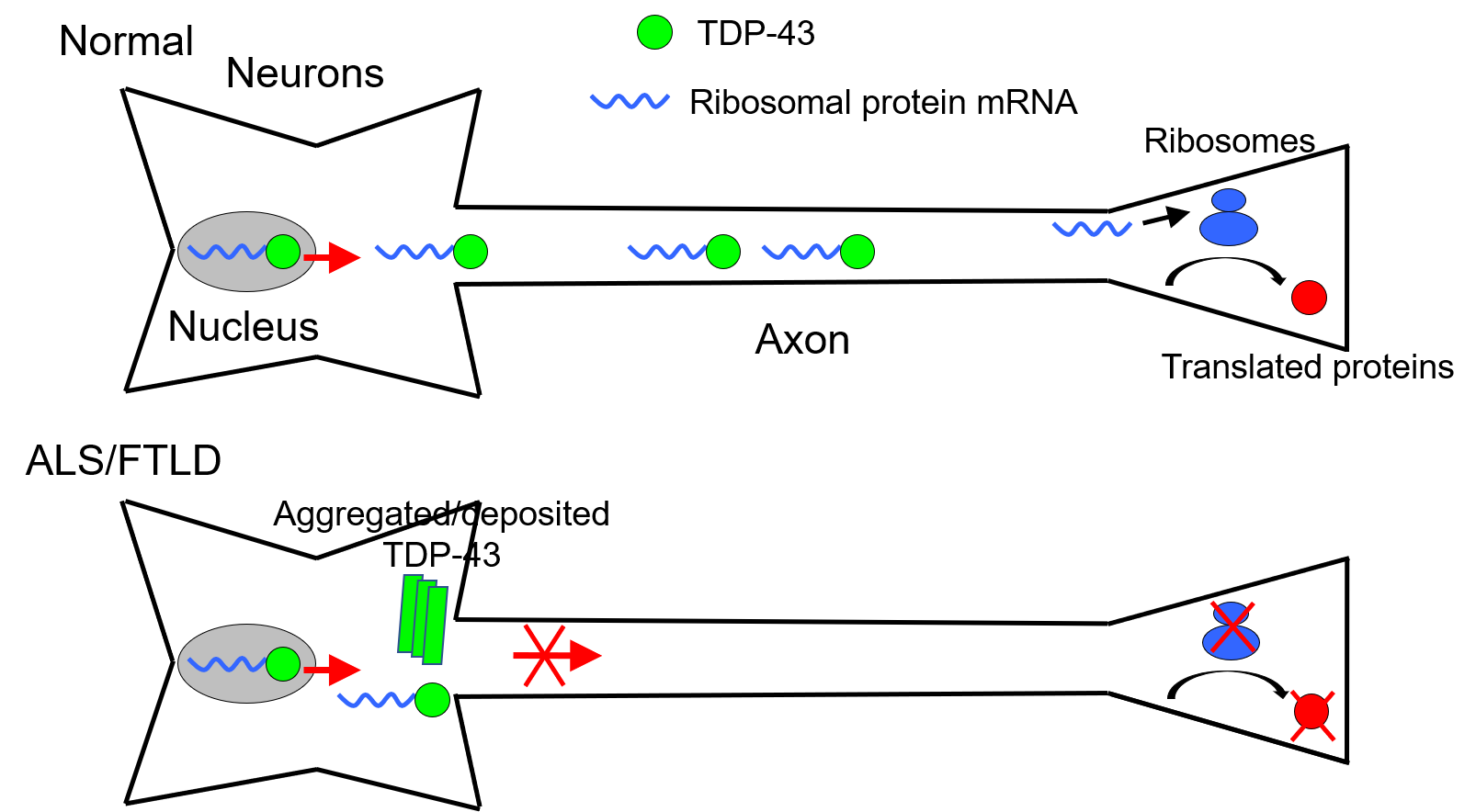