A research group of scientists from The University of Tokyo and Osaka University has theoretically discovered a relation between quantum mechanics and thermodynamics.

Recently, it has become possible to isolate a quantum system from its environment over a reasonably long period, which enables the direct observation of the dynamics of isolated quantum systems (e.g., ultracold atoms, which simulate the XYZ spin chain) induced by suddenly changing a physical parameter. After this so-called "quench," the system often relaxes to a steady state, where the expectation values of local observables become almost time independent. Thus, the time evolution following a quantum quench is studied to discuss correspondence between quantum mechanics and thermodynamics.

In this study, the researchers considered the magnetic susceptibility of a quantum spin system. In this situation, the quench susceptibility (the rate of magnetization change induced by a quench in quantum mechanics) is a function of wave vector k.

They also revealed a new necessary condition for thermalization, the process of physical bodies reaching thermal equilibrium through mutual interaction. The condition was different from those previously discovered to relax physically relevant quantities to the expectation value after quench in thermodynamics.

In order to give predictions on how these particular behaviors can be observed in experiments in the isolated quantum systems and how they deviate when the conditions are not fully satisfied, they obtained the adiabatic and isothermal susceptibilities as a function of wave vector k.

This group’s achievements could be considered the first step toward understanding the consistency between quantum mechanics and thermodynamics. It is anticipated that the anomalous behaviors of the quench susceptibilities revealed by this study will be verified experimentally. 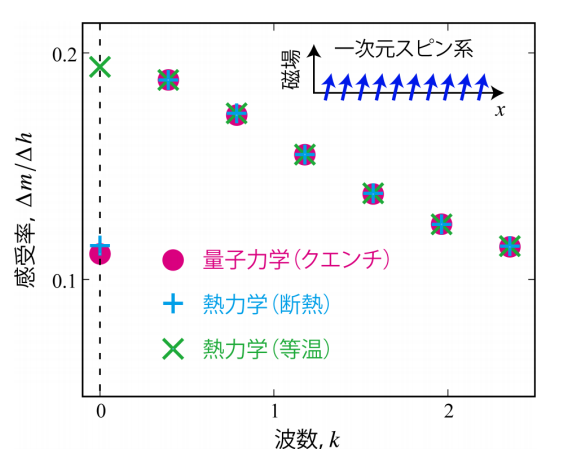