A group of researchers from the Institute for Cosmic Ray Research of The University of Tokyo and the Graduate School of Science of Osaka University, using a high-sensitivity ALMA* radio telescope, have discovered gigantic clouds (called halos) of gaseous carbon, spanning more than a radius of 10 kpc (32,600 light years) around young galaxies in the early universe (about 1 billion years after the Big Bang).

*ALMA: a high-frequency radio telescope made up of 66 individual antennas

They clarified that these gaseous carbon clouds were significantly more extended than the Hubble Space Telescope stellar continuum data, by a factor of ~5, and that carbon atoms produced in stars scattered beyond galaxies and formed these carbon clouds in the early universe.

No theoretical studies had predicted such huge carbon clouds around growing galaxies in the early universe. Carbon, oxygen, and many other elements heavier than hydrogen and helium did not exist before the Big Bang. Although only hydrogen and helium existed after the Big Bang, in the current universe, stars, planets and interstellar gas around us are laced with carbon, oxygen, and many other heavy elements. It is thought that heavy elements are formed by fusion in the cores of stars when the stars were born in space, but when and how heavy elements spread in universe has long been uncertain.

Some heavy element gases give off a few characteristic wavelengths. The light from the universe's most distant galaxies is stretched by the expansion of space as it travels through space. By the time the light reaches Earth, the short wavelengths of visible and ultraviolet light are transformed into the longer wavelengths of infrared light.

Astronomers observed the gaseous state of heavy elements in the earliest stage of galaxy formation using ALMA. They looked at the universe's early eras using the light from galaxies that existed several hundred million years after the universe’s birth and found that heavy elements universally existed even around early normal galaxies.

However, with conventional telescopes, it was impossible to observe the spread of heavy elements outside the galaxy in the early universe due to the limited sensitivity of the telescopes. Thus, this group focused on the brightest observed emission line from most normal star-forming galaxies, the 158 micron line arising from singly-ionized carbon (also known as C+ or C II).

The researchers examined ALMA data for 18 star-forming galaxies located 12.5-13 billion light-years away, collecting all the data that contain radio signals from carbon ions in galaxies in the early universe. By combining data on several galaxies, they obtained data of about 5 times higher sensitivity than that of conventional data, identifying several [C II] line sources.

This group will clarify physical mechanisms behind the formation of [C II] halos in the early universe through observation using telescopes including ALMA. 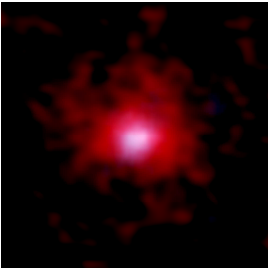 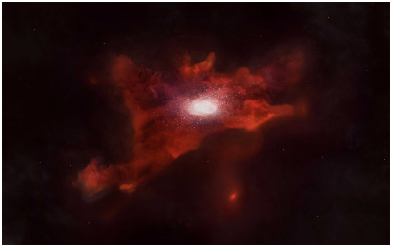