Control of light information in solid

In absorption and emission of light of semiconductor devices such as photodiodes and LED, excitons, composite particles formed as a bound state of an electron-hole pair, play a major role. The exciton is a bound state of an electron with a negative charge and an electron hole with a positive charge which are attracted to each other by the electrostatic Coulomb force. Absorption and emission of light can be caused by generation and recombination of excitons.

The existence of excitons had been confirmed, but there were few studies on using excitons as information carriers by transporting and controlling as in the case of electrons. While the Hall effect, a phenomenon in which charged particles moving through a magnetic field experience the force which causes the particles in solid to deviate from their straight path, has been widely studied, no reports have been made on excitons.

This group tried to observe the Hall effect and quantum transport in excitons by using anomalous excitons called ‘valley-polarized excitons.’ They studied two-dimensional (2D) layered material, such as graphene and molybdenum disulfide (MoS 2 ). Single layers of MoS 2, in particular, have attracted attention as a semiconductor material. MoS 2 with an ultrathin layered structure (0.6 nm for a monolayer) is a great material for transistors and has great optical properties. Because monolayers of MoS 2 and other transition metal dichalcogenides (TMDs) form valley excitons that have the valley-exciton locked relationship, they are highly anticipated in the field of optoelectronics using excitons.

This group paid attention to the valley-coupled optical selection rule in monolayer MoS 2 , discovering that the anomalous excitons demonstrated the EHE in monolayer MoS 2 even if there was no magnetic field present. This shows the valley-selective spatial transport of the excitons in solid, which can become a basis of new electronics using excitons.

This study clarified the existence of EHE, the quantum transport of excitons. Although theoretical and experimental studies on this new recovery have not been fully performed yet; however, it is hoped that this group's achievements will enable the establishment of the basic theory of quantum transport of composite particles and accelerate studies on exciton transport in other semiconductor materials.

It was shown that long-distance transport of polarization information by valley excitons was achieved and that selective spatial transport of excitons could be performed by the EHE. Currently, the EHE is observed at low temperatures, but this discovery will advance studies on data storage and transfer using valley polarization and studies on the development of next-generation optical communication devices using polarization.

The spontaneous Hall effect driven by the quantum Berry phase (which serves as an internal magnetic flux in momentum space) manifests the topological nature of quasiparticles and can be used to control the information flow, such as spin and valley 1 , 2 . We report a Hall effect of excitons (fundamental composite particles of electrons and holes that dominate optical responses in semiconductors 3 ). By polarization-resolved photoluminescence mapping, we directly observed the Hall effect of excitons in monolayer MoS 2 and valley-selective spatial transport of excitons on a micrometre scale. The Hall angle of excitons is found to be much larger than that of single electrons in monolayer MoS 2 (ref. 4 ), implying that the quantum transport of the composite particles is significantly affected by their internal structures. The present result not only poses a fundamental problem of the Hall effect in composite particles, but also offers a route to explore exciton-based valleytronics in two-dimensional materials. 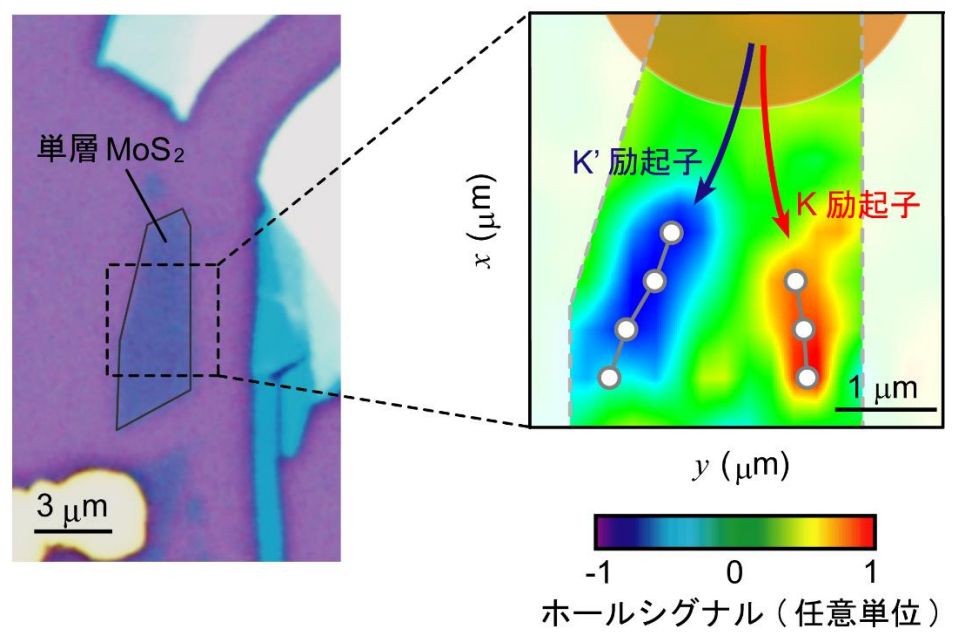 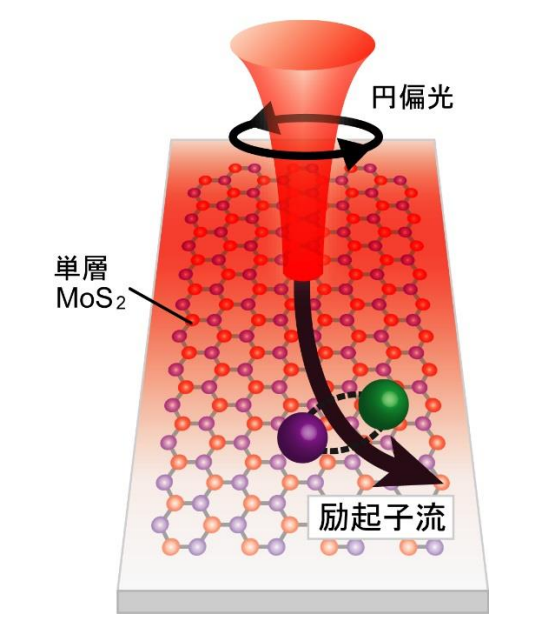 To learn more about this research, please view the full research report entitled “ Exciton Hall effect in monolayer MoS 2 ” at this page of the Nature Materials website.