Molten cesium iodide spread out the surface of uranium dioxide

A group of researchers led by Professor KUROSAKI Ken and Lecturer SUZUKI Masanori at the Graduate School of Engineering, Osaka University, together with Fukui University, discovered high wettability of liquid cesium iodide (CsI). Liquid CsI spread on the surface of solid uranium dioxide (UO 2 ), showing that the contact angle between the solid UO 2 and liquid CsI was virtually 0°, which means that the liquid had a strong affinity for the solid.

Solid and liquid wettability (affinity of a liquid for a solid surface) is closely related to energy necessary for removing the liquid from the solid, so the higher the wettability (the liquid permeates favorably), the more difficult it becomes to remove the liquid from the solid surface. The results of this group’s study that molten CsI permeated favorably on the surface of solid UO 2 suggested that the solid–liquid interface effects could act to suppress release of fission products (FP).

This time, this group melted CsI, a compound of radioactive materials of Cs and I, on solid nuclear fuel UO 2 , to directly observe its melting behavior. They found experimentally that liquid CsI dispersed extremely favorably toward solid UO 2 .

Taking the phenomenon that liquid CsI spreads the surface of solid uranium dioxide (UO 2 ) in mind will make it possible to evaluate release behavior of radioactive materials from nuclear fuel in detail. Of the various radioactive materials, Cs and I cause radioactive contamination and public exposure. Thus, results of this group’s study to increase the accuracy of assessment of release behavior of Cs and I from nuclear fuel are important. They will lead to accurate evaluation of radioactive contamination and the level of public exposure in the areas around the Fukushima Daiichi Nuclear Plant, as well as advancing implementation of the decommissioning of reactors at the plant.

In March 2011, the Fukushima Daiichi Nuclear Power Plant accident caused nuclear fuel to melt and the release of high-volatility fission products into the environment. Caesium and iodine caused environmental contamination and public exposure. Certain fission-product behaviours remain unclear. We found experimentally that liquid CsI disperses extremely favourably toward solid UO 2 , exhibiting a contact angle approaching zero. We further observed the presence of CsI several tens of micrometres below the surface of the solid UO 2 sample, which would be caused by the infiltration of pores network by liquid CsI. Thus, volatile fission products released from molten nuclear fuels with complex internal composition and external structure migrate or evaporate to varying extents, depending on the nature of the solid–liquid interface and the fuel material surface, which becomes the pathway for the released fission products. Introducing the concept of the wettability of liquid chemical species of fission products in contact with solid fuels enabled developing accurate behavioural assessments of volatile fission products released by nuclear fuel. 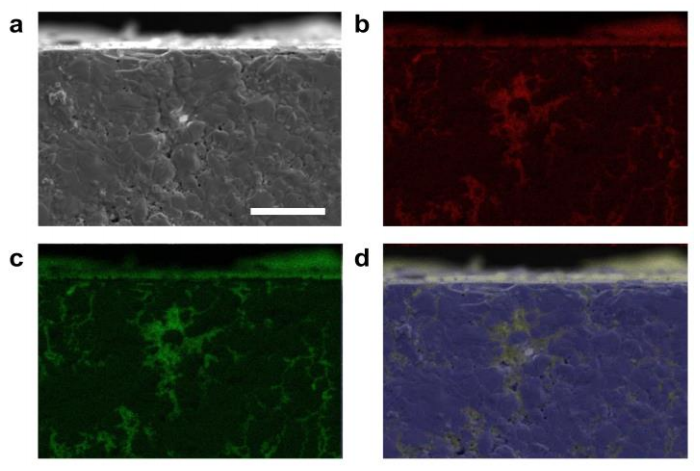 Figure 2. Cross-sectional observation results following sessile drop method testing between solid UO 2 and liquid CsI. (a) SEM image and EDX mapping images of (b) I, (c) Cs and (d) U. Observations noted deep infiltration of liquid CsI into the solid UO 2 on a macroscopic scale. Scale bar is 20 mm.

To learn more about this research, please view the full research report entitled " High wettability of liquid caesium iodine with solid uranium dioxide " at this page of the Scientific Reports website.