This electrospun nanofiber sheet contains B12, an important vitamin necessary for recovering nerve systems, and is very flexible and biodegradable in vivo. Artificial nerves were developed as a medical device for peripheral nerve disorder; however, they were just nerve conduits for repair of injured nerves and didn’t have the effect of facilitating nerve regeneration. Moreover, because they were used only in patients who had a loss of nerve continuity, the number of patients who could use artificial nerves was limited.

It was known that vitamin B12 was effective for nerve regeneration; however, its oral administration was ineffective and there were no devices for directly administrating it to the affected area. For this reason, the development of devices to facilitate nerve regeneration by locally administrating vitamin B12 to the affected areas while being able to be used for common patients with continuous nerve injury (in which there is no loss of nerve continuity , but nerves are injured) were sought after.

This joint group developed a special electrospun nanofiber sheet to be implanted on the injury site and gradually release methylcobalamin (MeCbl), one of the active forms of vitamin B12 homologues, until the injury site is cured. As the size of electrospun nanofiber was thinned down to hundreds of nanometers and its crystallinity was reduced, the sheet can be directly wrapped around nerves. In addition, the sheet is made of biodegradable plastic, so it is eventually excreted from the body. This sheet was implanted in rat sciatic nerve crush injury models. Their nerve axon was regenerated 6 months after surgery and the recovery of their motor and sensory function was confirmed.

Currently, this group is discussing with a pharmaceutical company about the use of these sheets in a clinical setting as treatment devices for peripheral nerve disorders such as carpal-tunnel syndrome.

Peripheral nerve injury is one of common traumas. Although injured peripheral nerves have the capacity to regenerate, axon regeneration proceeds slowly and functional outcomes are often poor. Pharmacological enhancement of regeneration can play an important role in increasing functional recovery. In this study, we developed a novel electrospun nanofiber sheet incorporating methylcobalamin (MeCbl), one of the active forms of vitamin B12 homologues, to deliver it enough locally to the peripheral nerve injury site. We evaluated whether local administration of MeCbl at the nerve injury site was effective in promoting nerve regeneration. Electrospun nanofiber sheets gradually released MeCbl for at least 8 weeks when tested in vitro. There was no adverse effect of nanofiber sheets on function in vivo of the peripheral nervous system. Local implantation of nanofiber sheets incorporating MeCbl contributed to the recovery of the motor and sensory function, the recovery of nerve conduction velocity, and the promotion of myelination after sciatic nerve injury, without affecting plasma concentration of MeCbl. 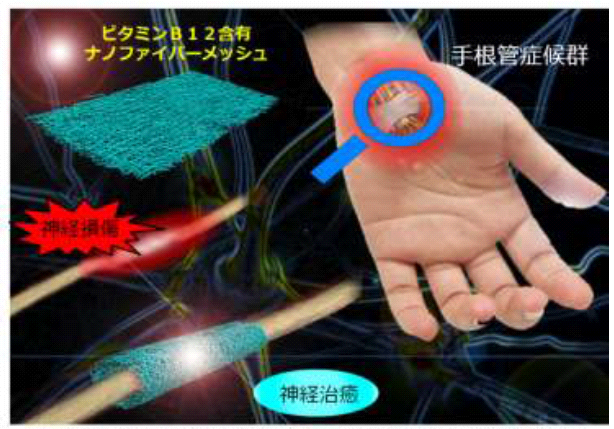 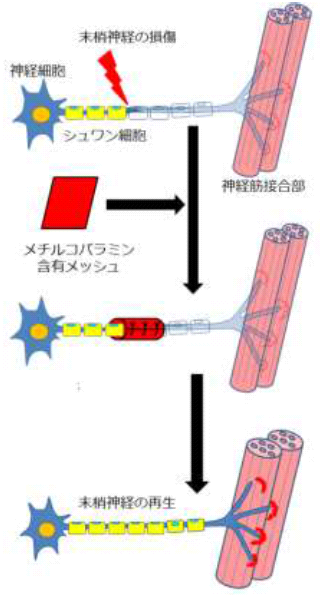 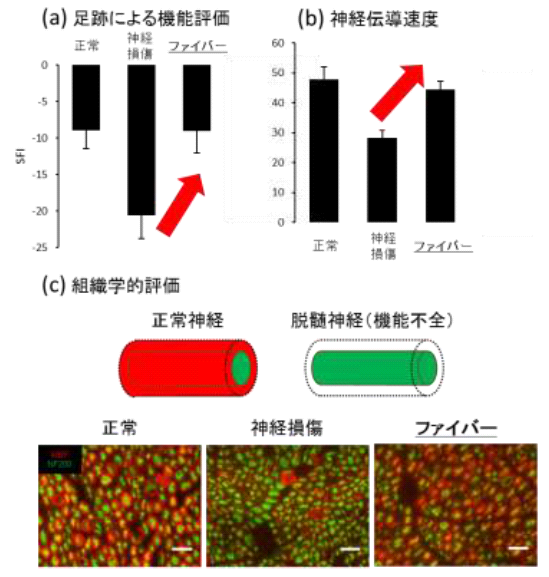