Neuropathic pain is a refractory chronic pain caused by diseases such as nerve damage, diabetes, and cerebral stroke. Although it is estimated that many patients in Japan (approximately 20 million) suffer from neuropathic pain, only a quarter of them are satisfied with current treatment and the development of new treatment drugs is sought after.

Neuropathic pain is caused by abnormal excitation arising from damaged neurons. It is thought that diseases, such as nerve damage, diabetes, and cerebral stroke, cause chronic refractory pain. Sensory information reaches to the spinal cord via peripheral nerves. One doesn’t feel pain until sensory information modified and integrated in the spinal dorsal horn reaches to the brain through secondary analgesic pathway. It is thought that neuropathic pain is mainly caused by abnormal excitation of neurons in the spinal dorsal horn.

There are some hypotheses of the mechanism behind pain in the central nervous system, but effective treatment drugs based on these hypotheses have not been developed. Focusing on neurons in the spinal dorsal horn, an important region for transmission and relay of pain signals, this group examined pain-inducing molecules and their mechanisms.

It is hoped that epoch-making drugs for treating pain with high effectiveness and safety will be developed by suppressing Netrin-4 expression against chronic pain, which cannot be cured by existing drugs.

Because of the incomplete understanding of the molecular mechanisms that underlie chronic pain, the currently available treatments for this type of pain remain inefficient. In this study, we show that Netrin-4, a member of the axon guidance molecule family, was expressed in dorsal horn inner lamina II excitatory interneurons in the rat spinal cord. A similar expression pattern for Netrin-4 was also observed in human spinal cord. Behavioral analysis revealed that tactile and heat hyperalgesia after peripheral nerve injury or inflammation were abolished in Netrin-4–mutant rats. Transient suppression of Netrin-4 or its receptor Unc5B after injury could also prevent allodynia. Conversely, intrathecal administration of Netrin-4 protein to naive rats enhanced excitatory synaptic transmission in the dorsal horn and induced allodynia, suggesting that Netrin-4 is involved in spinal sensitization. Furthermore, the Unc5B receptor and subsequent activation of the tyrosine phosphatase SHP2 mediated Netrin-4–induced pain signaling in the spinal cord. These results identify Netrin-4 as a novel protein regulating spinal sensitization leading to chronic pain. Our findings provide evidence for the function of Netrin in the adult nervous system, as well as a previously unknown function in inducing pain signals from dorsal horn interneurons. 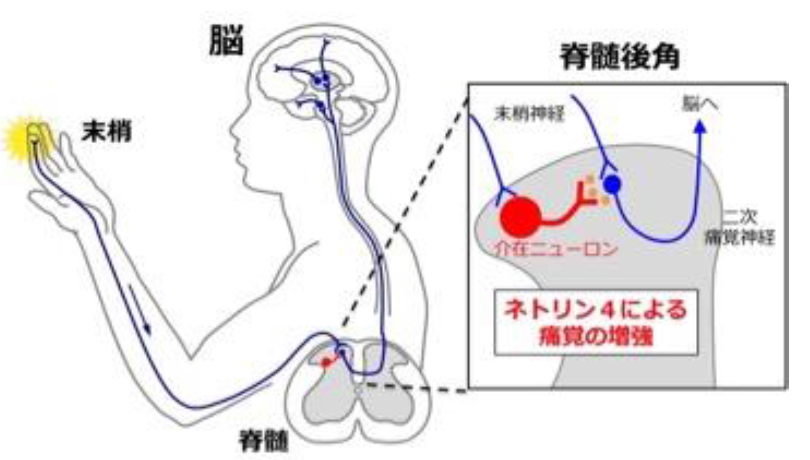 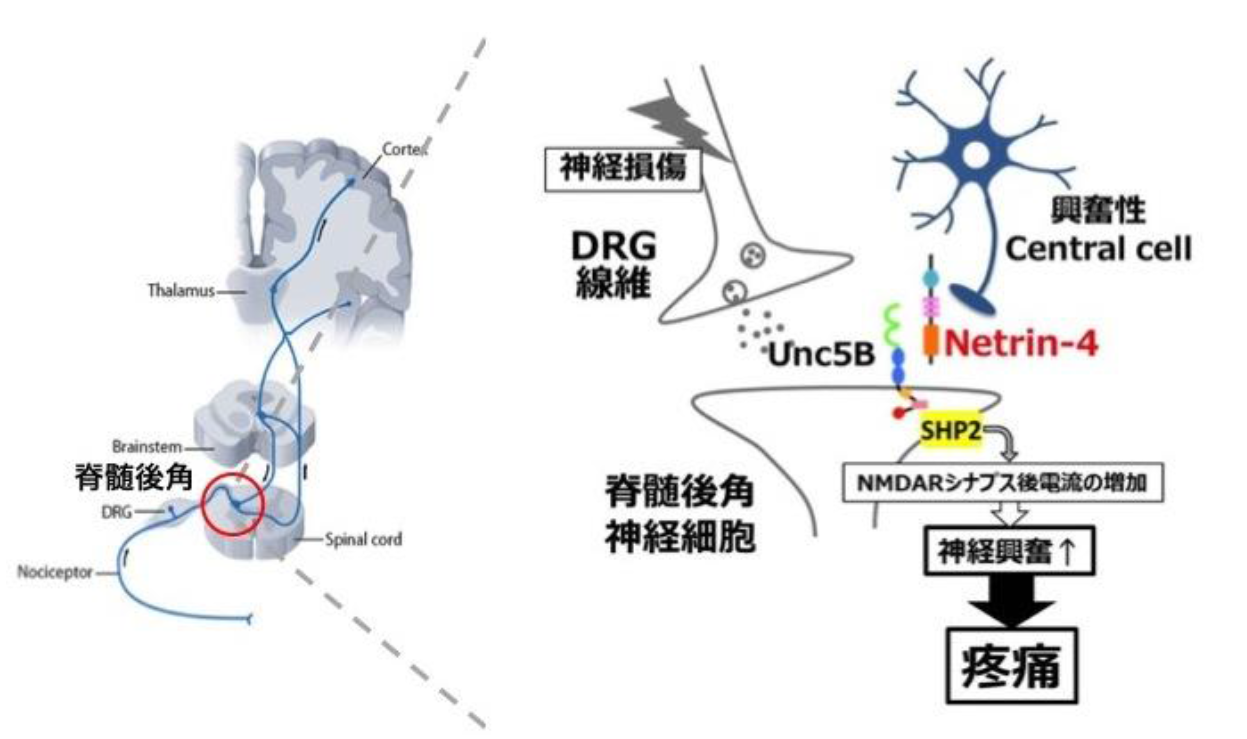 To learn more about this research, please view the full research report entitled “ Dorsal horn interneuron-derived Netrin-4contributes to spinal sensitization in chronic pain via Unc5B ” at this page of the Journal of Experimental Medicine website.