Will be helpful for designing anti-allergy agents targeting TLR7

The innate immune system serves as a mechanism for preventing the body from pathogens such as bacteria and viruses, and TLRs play the role in pathogen recognition. TLR7, a type of Toll-like Receptor, facilitates the production of interferons by recognizing viral single-stranded RNA (ssRNA) or synthesized chemical ligands. So, TLR7 has drawn attention as a target for anti-virus drugs, vaccines, and anti-cancer drugs, but the ligand recognition mechanism was unknown.

This group clarified the structure of a compound bound to a polyuridine ssRNA (polyU) and one of the two chemical ligands (guanosine or loxoribine), or chemical ligand R848. As a result, it was clarified that TLR7 dimerization was induced by forming a 2:2 complex or 2:2:2 complex with each ligand.

Guanosine, loxoribine, and chemical ligand R848 were in the first site in the dimerization interface, and polyU was in the second site of the concave surface of the TLR7 ring shape structure. As a result of structural analysis and biochemical experiments, it was found that TLR7 was synergistically activated by these two ligands.

It had been thought that TLR7 was a receptor to recognize single-stranded RNA, but from this study, it was clarified that TLR7 was activated by simultaneously recognizing two ligands by using two ligand-binding sites. From this, it is hoped that the development of drugs targeting TLR7 will be promoted from a new perspective for controlling at two distinct ligand-binding sites. These findings will lead to the development of vaccine adjuvants and designing of drugs for treating viral infections and allergies.

Toll-like receptor 7 (TLR7) is a single-stranded RNA (ssRNA) sensor in innate immunity and also responds to guanosine and chemical ligands, such as imidazoquinoline compounds. However, TLR7 activation mechanism by these ligands remain largely unknown. Here, we generated crystal structures of three TLR7 complexes, and found that all formed an activated m-shaped dimer with two ligand-binding sites. The first site conserved in TLR7 and TLR8 was used for small ligand-binding essential for its activation. The second site spatially distinct from that of TLR8 was used for a ssRNA-binding that enhanced the affinity of the first-site ligands. The first site preferentially recognized guanosine and the second site specifically bound to uridine moieties in ssRNA. Our structural, biochemical, and mutagenesis studies indicated that TLR7 is a dual receptor for guanosine and uridine-containing ssRNA. Our findings have important implications for understanding of TLR7 function, as well as for therapeutic manipulation of TLR7 activation. 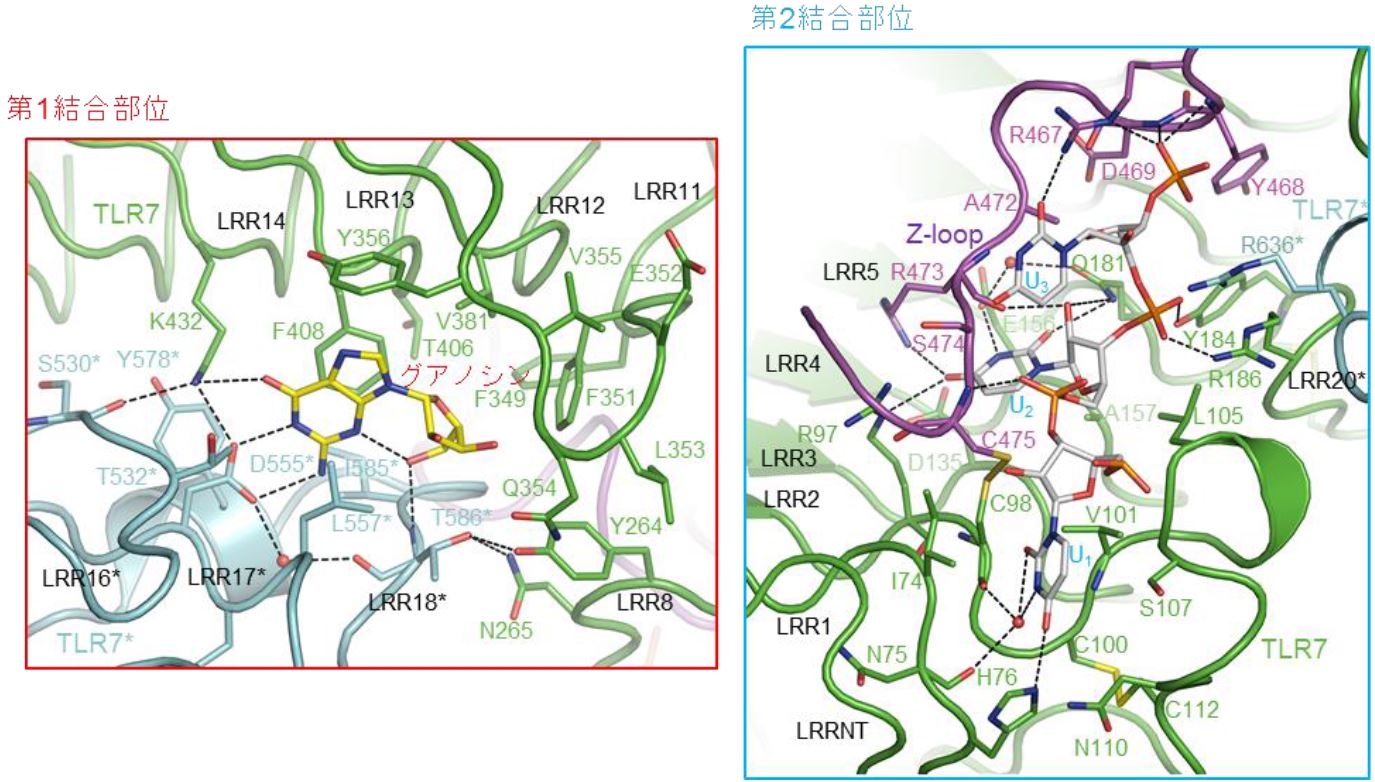 To learn more about this research, please view the full research report entitled “ Structural analysis reveals that Toll-like receptor 7 is a dual receptor for guanosine and single-stranded RNA ” at this page of the Immunity website.