The 2013-2014 mortality rates for Japanese patients with pancreatic and lung cancers are high, regardless of gender. Early detection of both cancers is difficult and many cases are unresectable or untreatable when a definitive diagnosis is made. Although some lung cancer drugs show significant effectiveness as molecular targeting treatment drugs, cases in which these drugs can be used are limited, and even if a successful outcome in treatment is achieved, cancers develop resistances to these drugs during the course of the disease. Pancreatic cancer drugs with good results have not yet been developed.

In pancreatic and lung cancers, protein abnormalities such as Ras and epidermal growth factor (EGF) receptors are frequently observed. It is thought that these proteins play a role in promoting normal cell proliferation and that cells indefinitely proliferate because they are abnormally activated in cancer cells. Because of this, it is hoped that new proteins which promote cancer progression can be found in order to develop anticancer agents for inhibiting these proteins’ functions and treat cancer by using them with existing anticancer drugs.

Expression of Dickkopf1 (DKK1) and cytoskeleton-associated protein 4 (CKAP4) was frequent in tumor lesions of human pancreatic and lung cancers and deteriorated cancers. Dkk1 is exogenously secreted, so in order to promote cancer cell proliferation, it’s necessary to bind to receptors on the surface of cells and transmit information to inside the cell; however, it was not known what a Dkk1 receptor was.

A group of researchers led by Professor KIKUCHI Akira at the Department of Biochemistry, Graduate School of Medicine, Osaka University clarified that binding of Dkk1 to CKAP4 in pancreatic and lung cancers promoted cancer cell proliferation. Together with research groups in the Departments of Gastroenterological Surgery, General Thoracic Surgery, and Diagnostic Pathology, this group found high expression of Dkk1 and CKAP4 in 60 percent of patients with pancreatic and lung cancers and clarified that the prognosis of patients with high expression of both proteins was not good. When CKAP4 antibodies were administered to mice, it was found that they had the effect of blocking proliferation of cancer cells that expressed both Dkk1 and CKAP4.

From these findings, it is expected that Dkk1 and CKAP4 can be used as new biomarkers for diagnosis of pancreatic and lung cancers and that antibodies to CKAP4 can be used for treatment in the future. This group’s discovery will contribute to the development of diagnostic drugs leading to the early detection of both cancers and highly effective treatment agents.

Dickkopf1 (DKK1) is a secretory protein that antagonizes oncogenic Wnt signaling by binding to the Wnt coreceptor low-density lipoprotein receptor–related protein 6 (LRP6). DKK1 may also regulate its own signaling to promote cancer cell proliferation, but the mechanism is not understood. Here, we identified cytoskeleton-associated protein 4 (CKAP4) as a DKK1 receptor and evaluated CKAP4-mediated DKK1 signaling in cancer cell proliferation. We determined that DKK1 binds CKAP4 and LRP6 with similar affinity but interacts with these 2 receptors with different cysteine-rich domains. DKK1 induced internalization of CKAP4 in a clathrin-dependent manner, further supporting CKAP4 as a receptor for DKK1. DKK1/CKAP4 signaling activated AKT by forming a complex between the proline-rich domain of CKAP4 and the Src homology 3 domain of PI3K, resulting in proliferation of normal cells and cancer cells. Expression of DKK1 and CKAP4 was frequent in tumor lesions of human pancreatic and lung cancers, and simultaneous expression of both proteins in patient tumors was negatively correlated with prognosis and relapse-free survival. An anti-CKAP4 antibody blocked the binding of DKK1 to CKAP4, suppressed AKT activity in a human cancer cell line, and attenuated xenograft tumor formation in immunodeficient mice. Together, our results suggest that CKAP4 is a potential therapeutic target for cancers that express both DKK1 and CKAP4. 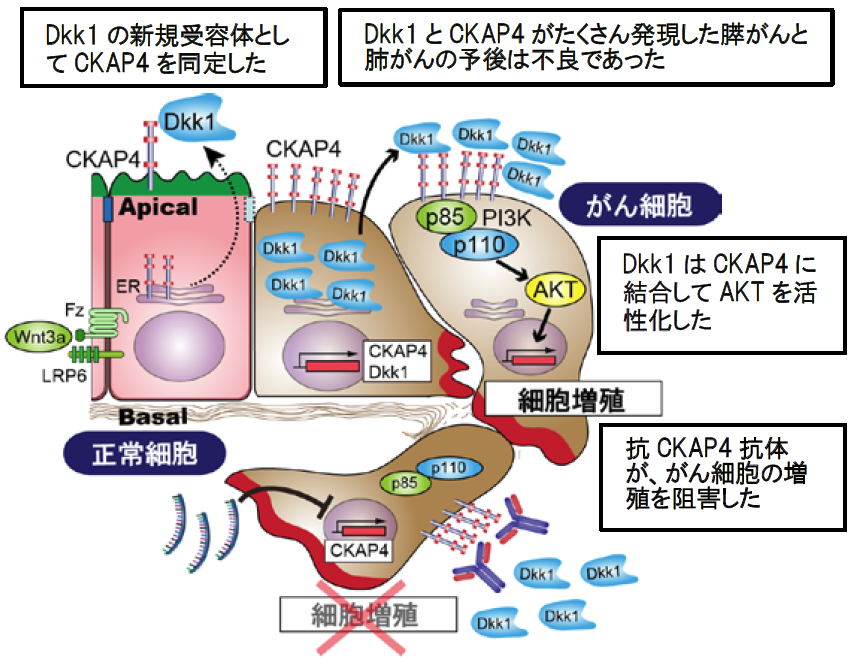 To learn more about this research, please view the full research report entitled “ CKAP4 is a Dickkopf1 receptor and involved in tumor progression ” at this page of the Journal of Clinical Investigation website.