KURODA Shun’ichi (Professor) and YOSHIMOTO Nobuo (Specially Appointed Associate Professor) at the Department of Biomolecular Science and Reaction, The Institute of Scientific and Industrial Research, in cooperation with SUZUKI Masato (Chief Researcher, Advanced Research Division, Panasonic Corporation), developed a method for making a prompt, exhaustive isolation of olfactory receptors (ORs) responding to the odorant of interest.

Paying attention to the fact that each olfactory sensory neuron (OSN) expresses an OR, this joint group made a system in which OSNs from mice were applied to a microchamber array on a resin microscope slide and fluorescence was yielded when ORs responded to odorants. Using the Single-Cell Auto Prep System developed in 2013, this group isolated single OSNs responding to specific odorants and identified the OR gene through single cell polymerase chain reaction (PCR).

As a result, this group succeeded in isolating ORs which respond to three types of volatile organic compounds (2-pentanone, pyridine, 2-butanone) respectively in urine samples from lung cancer patients. Like OSNs, animal cells expressing ORs responded to the odorant of interest, emitting fluorescence.

This group’s achievement will enable quick and easy exhaustive clarification of and the treatment and analysis of ORs (OR repertoire) responding to specific odorants, which previously required a great deal of time and effort. It is anticipated that these results will be applied to biosensors capable of highly detecting only desired odorants.

Mammals can recognize a vast number of odorants by using olfactory receptors (ORs) known as G protein-coupled receptors. The OR gene family is one of the most diverse gene families in mammalian genomes. Because of the vast combinations of ORs and odorants, few ORs have thus far been linked to specific odorants. Here, we established a functional screening method for OR genes by using a microchamber array containing >5,400 single olfactory epithelium-derived cells from mice applied to time-lapse single-cell array cytometry. This method facilitated the prompt isolation of single olfactory sensory neurons (OSNs) responding to the odorant of interest. Subsequent single-cell RT-PCR allowed us to isolate the genes encoding respective ORs. By using volatile molecules recognized as biomarkers for lung cancers, this method could deorphanize ORs and thereby reconstitute the OR-mediated signaling cascade in HEK293T cells. Thus, our system could be applied to identify any receptor by using specific ligands in the fields of physiopathology and pharmacology. 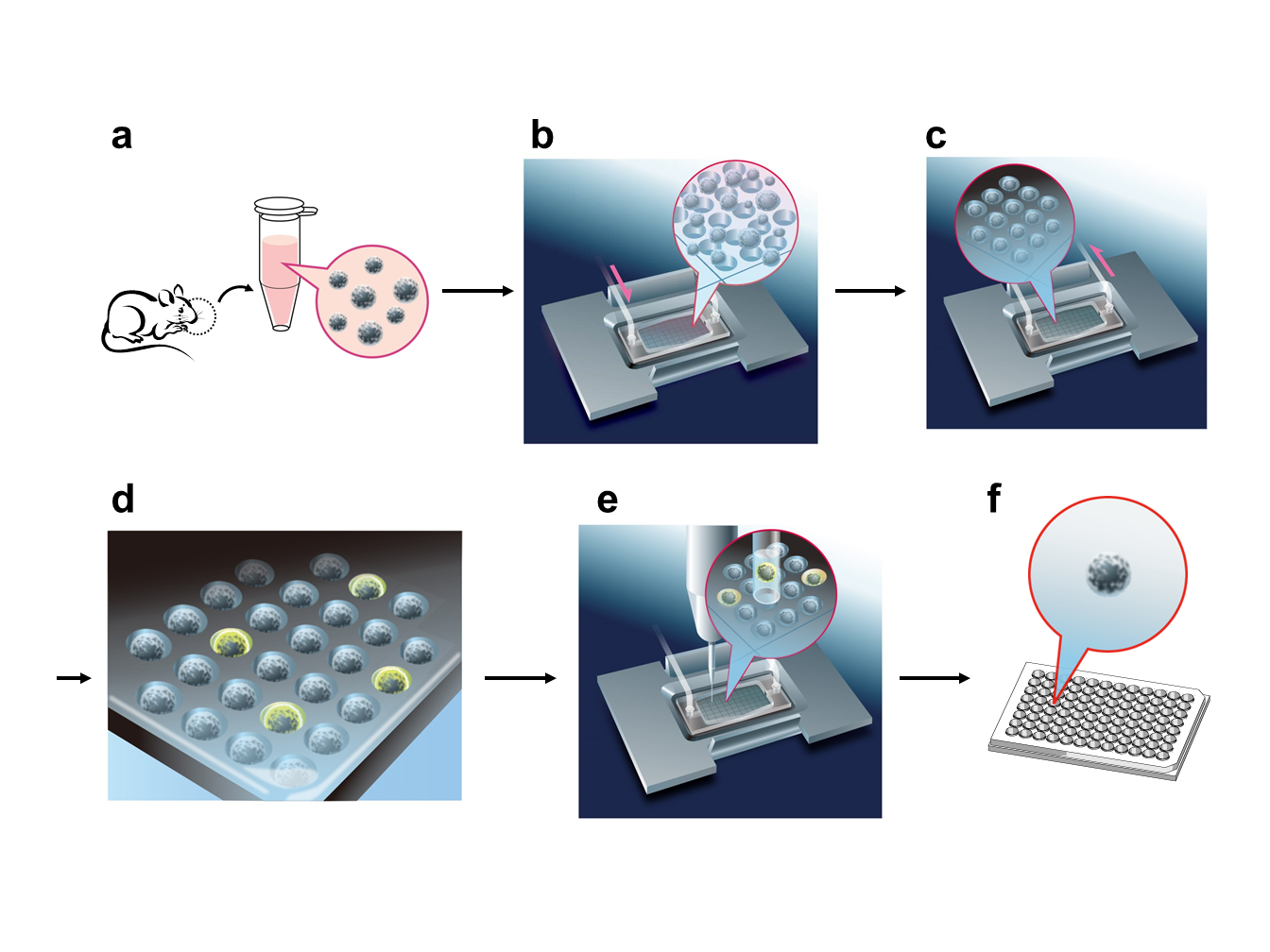 Mouse OE-derived cells were labeled with Fluo4-AM (a) , and applied to a 10-μm microchamber array chip equipped with a flow chamber, followed by brief centrifugation (b) . Floating and untrapped cells were removed by circulating Ringer solution and stimulated with an odorant (c) . OSNs expressing odorant-specific ORs showed transient fluorescence from the increase of intracellular Ca 2+ concentration (d) . Each activated cell was retrieved (e) , transferred to the 96-well PCR plate (f) , and subjected to single-cell RT-PCR.

To learn more about this research, please view the full research report entitled " Deciphering the Receptor Repertoire Encoding Specific Odorants by Time-Lapse Single-Cell Array Cytometry " at this page of the Scientific Reports website.