It has been known that endocardial endothelium germinated and formed coronary arteries through the action of Vascular Endothelial Growth Factor (VEGF) secreted by the myocardium; however, the mechanism behind the formation of coronary veins had not been clarified. This research group found that there were two kinds of cells in the sinus venosus near the heart: differentiated venous endothelial cells and undifferentiated endothelial cells.

In this research, the researchers created cardiomyocyte-specific angiopoietin-1 (Ang1) knockout (Ang1CKO) mice. Surprisingly, they found that the formation of coronary arteries was nearly normal in fetal Ang1CKO mice, but that coronary veins were missing.

In further research, they also found that during the fetal stage, undifferentiated endothelium in the sinus venous migrated to the heart through the action of Ang1 secreted from the myocardium and differentiated into venous endothelial cells, resulting in the formation of coronary veins. That is, Ang1, an angiogenic factor secreted from the myocardium, is critical in the formation of coronary veins in the developing heart. It is hoped that this group's research will assist the development of angiogenic treatments for ischemic heart conditions such as myocardial infarction.

The origin and developmental mechanisms underlying coronary vessels are not fully elucidated. Here we show that myocardium-derived ​ angiopoietin-1 (​ Ang1 ) is essential for coronary vein formation in the developing heart. Cardiomyocyte-specific ​ Ang1 deletion results in defective formation of the subepicardial coronary veins, but had no significant effect on the formation of intramyocardial coronary arteries. The endothelial cells (ECs) of the sinus venosus (SV) are heterogeneous population, composed of ​ APJ -positive and ​ APJ -negative ECs. Among these, the ​ APJ -negative ECs migrate from the SV into the atrial and ventricular myocardium in ​ Ang1 -dependent manner. In addition, ​ Ang1 may positively regulate venous differentiation of the subepicardial ​ APJ -negative ECs in the heart. Consistently, in vitro experiments show that ​ Ang1 indeed promotes venous differentiation of the immature ECs. Collectively, our results indicate that myocardial ​ Ang1 positively regulates coronary vein formation presumably by promoting the proliferation, migration and differentiation of immature ECs derived from the SV. 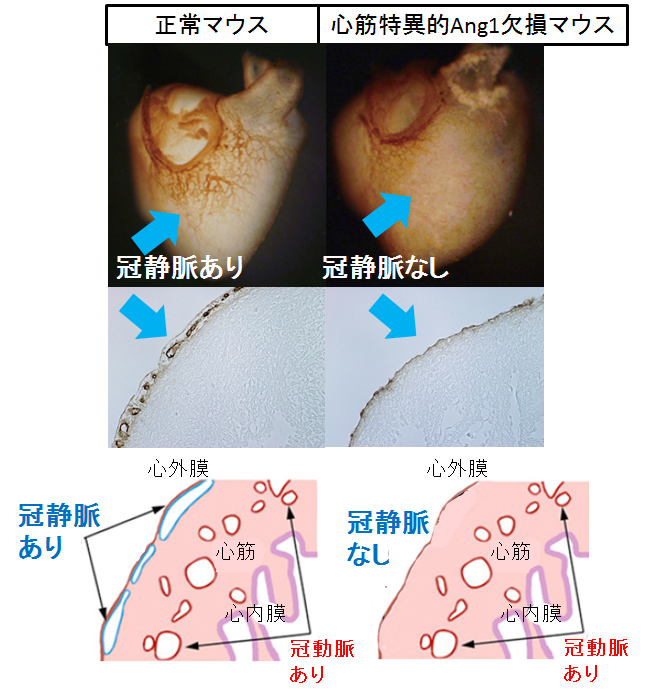 To learn more about this research, please view the full research report entitled " Myocardium-derived angiopoietin-1 is essential for coronary vein formation in the developing heart " at this page of the Nature Communications website.