Under the leadership of FURUKAWA Takahisa (Professor), OMORI Yoshihiro (Associate Professor) and CHAYA Taro (graduate student) at the Institute for Protein Research, Osaka University, a group of researchers have clarified the mechanism for regulating protein transport at ciliary tips and demonstrated its importance in ciliary morphogenesis. This group's achievement will be a great step in understanding the mechanism behind ciliary formation and lead to elucidation of the mechanisms for developing congenital anomalies such as polydactyly and hydrocephalus in ciliopathy.

Cilia are microtubule-based projections found on nearly every cell in the human body and can be divided into motile forms and non-motile (primary) ones. The latter is thought to be "sensory cellular antennae that coordinate a large number of cellular signaling pathways". In humans, abnormal ciliary functions cause a variety of conditions referred to as ciliopathy, including retinitis pigmentosa, infertility, cystic kidney, obesity, polydactyly, and hydrocephalus. Proteins are carried in cilia and their bi-directional motility is called intraflagellar transport (IFT). At the distal tip of the cilia/flagella, IFT complexes turn around to switch from anterograde to retrograde transport; however, the underlying regulatory mechanism is unclear.

This group identified Intestinal Cell Kinase (ICK), phosphorylated enzyme localized at the tips of cilia as a regulator of ciliary transport. ICK-deficient mice presented developmental abnormalities such as polydactyly, hydrocephalus, and dilation of the cerebral ventricles. Moreover, the number and length of cilia in such cases decreased. While loss of ICK caused the accumulation of IFT-A, IFT-B, BBSome, protein complex components responsible for intraflagellar transport at ciliary tips, overexpression of ICK induced the strong accumulation of IFT-B at ciliary tips. From these findings, the researchers found that ICK located at the ciliary tips played an important role in ciliary morphogenesis by regulating the change in direction of protein intraflagellar transport, thereby contributing to ciliary formation.

Cilia and flagella are formed and maintained by intraflagellar transport (IFT) and play important roles in sensing and moving across species. At the distal tip of the cilia/flagella, IFT complexes turn around to switch from anterograde to retrograde transport; however, the underlying regulatory mechanism is unclear. Here, we identified ICK localization at the tip of cilia as a regulator of ciliary transport. In ICK‐deficient mice, we found ciliary defects in neuronal progenitor cells with Hedgehog signal defects. ICK‐deficient cells formed cilia with mislocalized Hedgehog signaling components. Loss of ICK caused the accumulation of IFT‐A, IFT‐B, and BBSome components at the ciliary tips. In contrast, overexpression of ICK induced the strong accumulation of IFT‐B, but not IFT‐A or BBSome components at ciliary tips. In addition, ICK directly phosphorylated Kif3a, while inhibition of this Kif3a phosphorylation affected ciliary formation. Our results suggest that ICK is a Kif3a kinase and essential for proper ciliogenesis in development by regulating ciliary transport at the tip of cilia. 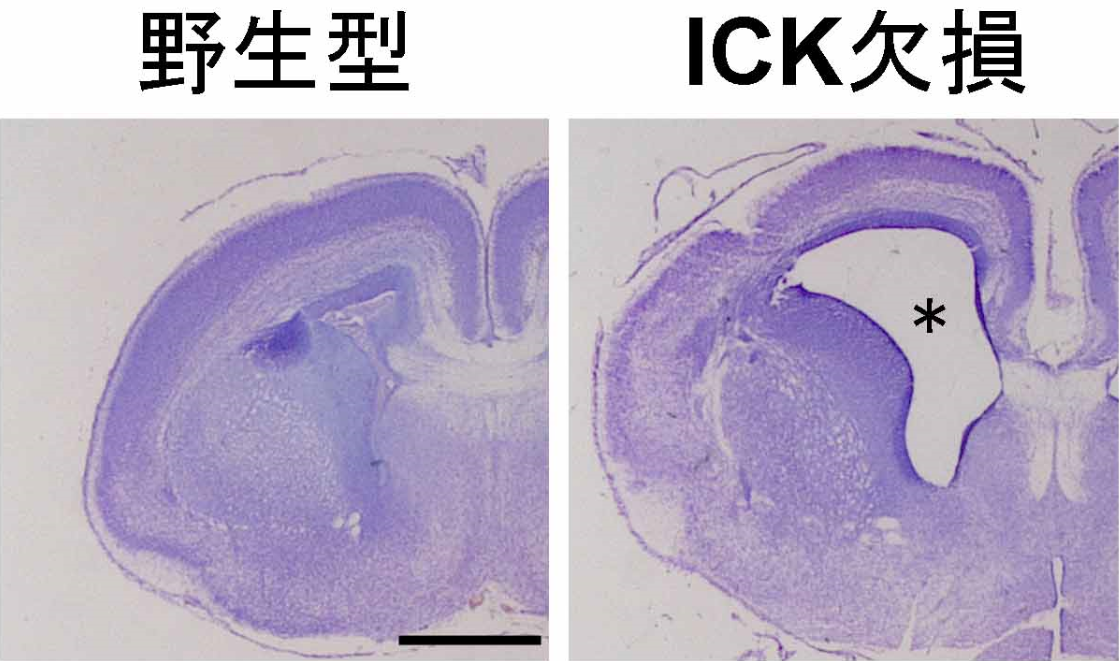 To learn more about this research, please read the full research report entitled " ICK is essential for cell type‐specific ciliogenesis and the regulation of ciliary transport " at this page of the EMBO Jounal website.