In recent years, measures against various infections have become necessary, and the development of infection prevention materials that directly protect against a wide range of viruses through new mechanisms has become urgent. Swine flu spread from high school students coming back to Japan from overseas in 2009 saw a huge outbreak among high school students in the Kansai region, which became a serious issue. And if we look overseas, we can see that measures against various viruses such as the MERS virus outbreak in Korea, the virulent avian influenza in East Asia and the Middle East, and the Ebola virus have become a social issue.

With all of this going on, Specially-Appointed Associate Professor KAIHATSU Kunihiro of the Institute of Scientific and Industrial Research turned his attention to the anti-viral properties of tea catechins and began his research toward the development of anti-viral medication based on catechins that was also body-friendly. The beneficial effects of tea has been known for quite some time, and research on topics regarding tea such as defense against the common cold by gargling with tea has been carried out. After researching tea over a number of years, Associate Professor KAIHATSU has successfully developed technology to even further improve the antibacterial and antiviral effects of catechins through modifying Epigallocatechin gallate (EGCG) , which contains particularly powerful antibacterial and antiviral properties even among tea catechins, with a fatty acid chain, which is an oil component. This is CateProtect, new Catechin technology from Osaka University. (fig. 1)

The 3 characteristics of CateProject, new technology that destroys viruses but is also easy on the body, are as follows:

Additionally, CateProtect has been confirmed to have high antiviral effects towards not only flu viruses such as H1N1, H3N2, and influenza type b, which make up more than 90 percent of community-acquired infections, but also against virus strains that have resistances to antiviral medications, such as T amiflu and amantadine, which have been viewed as a problem in recent years, as well as the avian influenza virus H5N2.

Because the effects of CateProtect do not vary by virus strain, it can be used even among fear of a pandemic with the appearance of an unknown virus.

Also, it was clarified that, in feline calicivirus (FCV), a surrogate of norovirus, CateProtect has extremely high virus inactivation properties when compared with natural catechin even in viruses with no viral membrane (envelope) like norovirus. (Table 2) 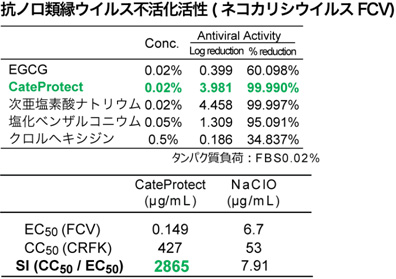 Hypochlorous acid, which is often used in response to norovirus, shows activity even at low concentrations, but it also displays high toxicity. However, the SI in CateProtect, or the ratio of activity to toxicity, is shown to be 350 times greater than that of hypochlorous acid, making it both a safe and effective solution.
In addition, CateProtect, which is tea catechin bonded with a fatty acid , has been confirmed to have effects against not only viruses, but also a wide range of bacteria such as Staphylococcus aureus, E. coli, and Klebsiella pneumoniae. (fig. 2)

In particular, activity has been seen in CateProtect against Staphylococcus aureus at a concentration of 4 times less than natural catechins (minimum inhibit ory concentration, MIC), with effects against drug-resistant strains of bacteria such as MRSA, the cause of hospital infections.

It has been clarified that such outstanding antimicrobial effects of CateProtect are caused by CateProtect binding to the bacterial membrane and causing cellular membrane damage.

It has also been confirmed that CateProtect is effective against allergens such as mites and pollen, so it can also be used in sterilizing everyday objects.

2. High Level of Safety Based on Catechins

CateProtect is made by taking natural tea catechins and combining them with natural fatty acids , meaning its components are very safe.

This high level of safety has been confirmed in tests regarding oral toxicity, dermal irritation, skin sensitization, and mutagenic properties.

3. New Technology Dev e loped and Proven at the University

The mechanisms that show the outstanding properties of CateProtect are born through binding long-chain fatty acids with tea catechins.

It is known that natural catechins combine with many different proteins, such as serums. As for their antibacterial and antiviral effects, it is thought that interaction between natural catechins and proteins on the surface of bacteria and viruses is included in their mechanism of action.

Antibacterial efficacy was tested in surfactants composed of fatty acid and sugars (such as maltose and sorbitol), but activity was not observed at even 500 times the level of concentration where CateProtect showed activity. In this way, it was confirmed that catechin skeletons and fatty acid modification were very important for antiviral activity.

In order to commercialize CateProtect, with its excellent antiviral and antibacterial properties, Associate Professor KAIHATSU founded Protectea, Ltd., an Osaka University Venture, at which he performed research and development on establishing production methods and member development.

As their first commercialized product, in 2014, Protectea, Ltd. began sales of its CateProtector, their most effective mask. In the future, they plan on using this new catechin from OU in the development of a variety of antivirus products, such as disinfectants and air filters, as well as medical and food products. 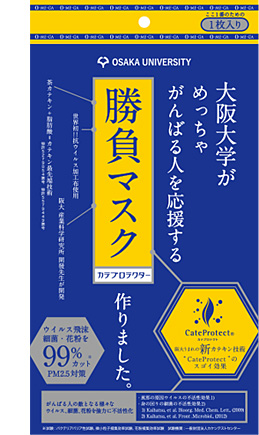 CateProtector is an antiviral mask developed based on research results at Osaka University in the hopes of helping out those who simply can't lose the fight against colds and viruses, and Osaka University and Osaka University Venture Protectea, Ltd. have collaborated to created special packaging for this "Must-Win Mask." We hope that this mask helps you to give it your all.

ResOU Editorial Team
Research is the key to unlocking the door to discovery. The ResOU Editorial Team, made up of public relations staff and creators at OU, brings to you the exciting world of research at Osaka University and the stories of its researchers.