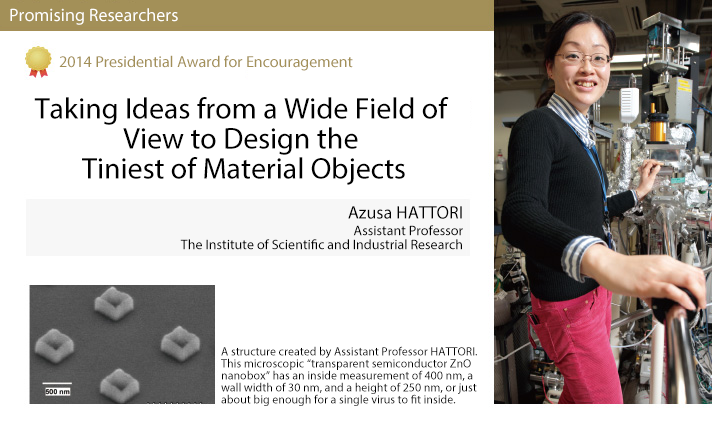 Assistant Professor Azusa HATTORI is hard at work creating nanosize structures of metallic oxides. As technology utilizing silicon as a material reaches its limit, metallic oxides are gathering attention as a next generation materials for electronics. Creating small objects from hard metallic oxides is quite difficult, but Assistant Professor HATTORI has managed to create one of the smallest structures in the world at 10~20 nanometers. That’s 1/1 billionth of a meter, which is incredibly small. This achievement has earned her the 2014 Presidential Award for Encouragement.

Since she was a high school student, Assistant Professor HATTORI always wanted to develop something new that could be useful to the world, so she entered the field of engineering. She continued, “I wanted to more deeply study surface science, the key to materials and device development,” which led her to enter graduate school. However, in the field of material engineering, the number of female researchers remains low.

Assistant Professor HATTORI was married and became a mother of two while in graduate school. She had her doubts about becoming a mother while she was a student, but she made the decision that, as a researcher, she couldn’t put her project on hold, but as a student, she could take a leave of absence. “If I fell behind, I just needed to catch up, that’s all.”

With the help of her husband, who is also a researcher, she can enjoy raising her children and making her favorite dishes. “How I manage the way I use my time is only possible through the understanding of my superiors and those around me,” she said with a smile.

“The important thing when it comes to being a researcher is to keep your eyes open and freely think of new ideas, but when you have children, your field of view naturally opens up,” said Assistant Professor HATTORI, who also mentioned that playing with her children and cooking also allow her to come up with new ideas.

With a industrially practicable device manufacturing in her field of view, Assistant Professor HATTORI looks to the future, saying, “I want to purposefully design and create nanomaterials, and make a new device that can reproduce brain function and photosynthesis,” no doubt a huge goal.

Assistant Professor HATTORI graduated from the School of Engineering at Osaka Prefectural University in 2001. In 2007, she received her doctorate degree in science from the Graduate School of Materials Science at Nara Institute of Science and Technology. That same year, she became a specially appointed researcher at the Research Center for Ultra-Precision Science and Technology at Osaka University’s Graduate School of Engineering, and she has served as assistant professor in the Institute of Scientific and Industrial Research since 2010. In 2014, Assistant Professor HATTORI was awarded the 7 th Shiseido Female Researcher Science Grant for her research in the field of condensed matter physics. Her area of expertise is condensed matter physics and nanostructured material science.