Turning Osaka University into a Global Hub for Asia-Pacific Researchers

“I want to turn Osaka University into a global hub for Asia-Pacific research.” Professor Yoneyuki SUGITA wants to create an environment at Osaka University which gathers active Asia-Pacific research experts from around the globe to deliver new knowledge all over the world. As a part of this endeavor, in 2014 the International Joint Research Promotion Program entitled “Peace and Stability in the Asia-Pacific Region: Multi-layered Analysis toward Formation of International Code of Conduct and Norm” was started, with Professor Sugita as a representative of the program. In addition to social sciences such as government, economics, and history, experts from field of medicine also participate in this program, further expanding this fusion research activity. 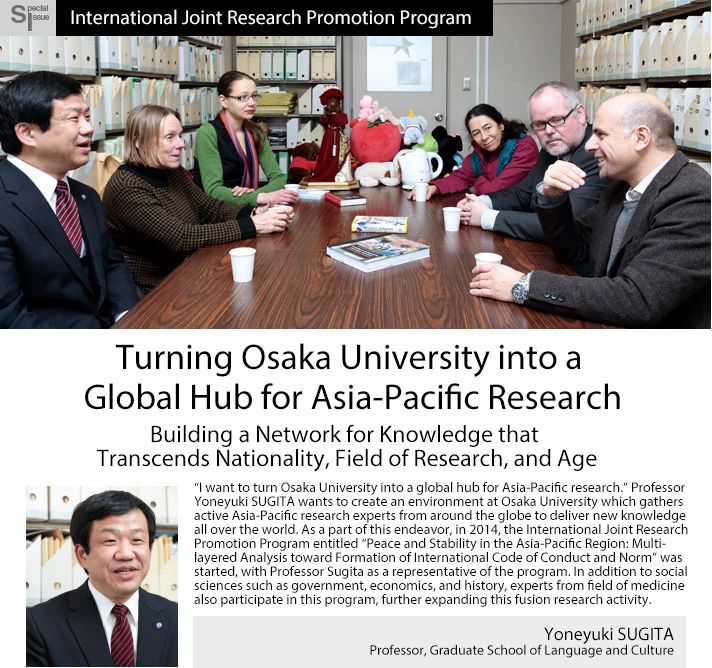 Researchers from Different Fields All Under One Roof

“There have always been large numbers of researchers studying the Asia-Pacific in Asia and America, but there are also a large number of researchers in Europe from a number of different fields,” says Professor Sugita. However, some issues arise due to differences of fields of study and simply being too far apart, making opportunities to get together and exchange relatively few. There are many researchers who “know each other’s names and have read each other’s works, but have never actually met.” We live in an era where the old method of clinging to one’s desk will not be enough for research to develop, so “broadening your network, and motivating one another through discussion is important.”

Professor Sugita’s research also has ties to international relations and the history of medical insurance, but dwelling on one or the other sometimes makes it difficult for things to come into view. This makes the International Joint Research Promotion Program a perfect fit for his situation, as it specializes in allowing Professor Sugita to call over other researchers.

“We currently live in the age of the Internet. However, in order to develop our research, I think it’s significant for researchers to gather together and have heated discussions with one another,” explains Professor Sugita. There is also ingenuity exercised in creating the structure for this project. “I’ve organized these symposiums so that only 10 people may attend, and even then they must submit a conference paper beforehand. I give them 15 minutes to present and 45 minutes for Q&A, and I also give everyone roles such as MC or commentator, no matter how well-known they may be in their fields. This creates and environment where every single attendee must contribute something to the symposium.” When researchers from different fields are able to discuss freely with one another, new seeds of research are born, which is exactly what Professor Sugita had in mind.

Providing Inspiration for the Younger Generation

As a part of the program, this February and March, Asia-Pacific researchers were called from all over the world to hold small seminars and symposiums open to the public. Up until this point, over 40 researchers have been invited for this program, and when compared to previous years when limited research funds allowed only 1 or 2 researchers to be invited per year, the scale of the effects of this program becomes quite clear. Professor Sugita will continue to work together with researchers invited from overseas to hold regularly scheduled seminars, among other academic events.

Professor Sugita plans to eventually gather the content of each seminar and symposium and compile them into a book to be published. “I made a promise with each researcher who presented at one of these seminars or symposiums that they would provide their thesis at a chapter’s length within 6 months,” said the professor. He mentioned that he wants to expand the stage of his presentations through publishing and tie this to the activation of the program.

Participation in this program provides a great chance to perform various kinds of exchange with international researchers gathered at Osaka University. Many researchers from Japan and abroad have been attracted by this aspect of the program and have expressed their interest in participating.

Professor Sugita thinks that this program will serve as inspiration for the younger generation. For instance, if a graduate student wishing to become a researcher meets researchers from inside Osaka University and also those from overseas, they may be able to find someone who can introduce them to faculty members at a university overseas to which they previously had no connection. This opportunity can provide hints like these for studying abroad. For undergraduate students, this program can also provide a chance to actually experience how discussions can develop in international symposiums conducted entirely in English.

“Through this system, we are able to expand our research. But it would not be possible without everyone’s support. I’d like to continue developing my research, while giving thanks to those who support me along the way.”

An Asia-Pacific research network that crosses fields of research, age, and nationality. Each day this network expands and develops, with Osaka University as its stage.

In order to achieve more flexible arrangements in the hiring of personal, Osaka University established a cross-appointment system. As of February, 2015, 25 individuals from 18 different countries, including the USA, Canada, Germany Sweden, Israel, Morocco, China, Vietnam, and Australia, among other, as well as 2 individuals from Japan, have utilized this system. These researchers perform collaborative research at Osaka University, regardless of their field.

His written works include Pitfall of Panacea: The Irony of US Power in Occupied Japan 1945-1952 (Routledge).

ResOU Editorial Team
Research is the key to unlocking the door to discovery. The ResOU Editorial Team, made up of public relations staff and creators at OU, brings to you the exciting world of research at Osaka University and the stories of its researchers.