Challenging Measurement, Observation, and Creation at the Atomic Level

Professor Anatoly Faenov from Russia is an internationally-respected authority on X-ray photology. High-performance X-ray spectrometers and spectroscopy that were developed based on his unique idea are widely used in the world as devices critical for X-ray imaging. Known for many theses published in Nature and other research journals, Professor Faenov achieved outstanding results in collaboration with the University of Nevada, Reno in the U.S. and world-class research institutes such as Japan Atomic Energy Agency (JAEA). Osaka University, with more than 100 laboratories conducting optical science, established the Division of Photon Science and Technology in the Institute for Academic Initiatives in order to become a world research center. We interviewed Professor Faenov about research at Osaka University, where globalization is being promoted. 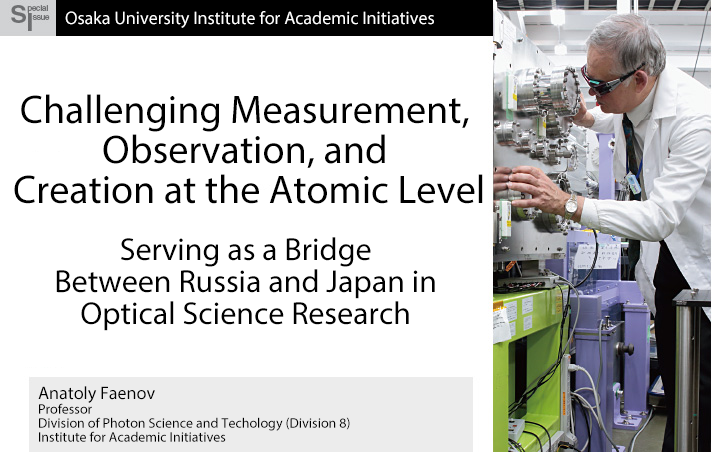 Another reason was the world's most advanced X-ray free electron laser (SACLA) at RIKEN SPring-8 Center (RSC) in Sayo-cho, Hyogo. SACLA is a device to make very strong X-ray lasers by accelerating electrons released from atoms with a high energy acceleration technique. Since the center allowed the shared use of SACLA in 2012, Osaka University's laboratories and research institutes conducting optical science research have worked on various approaches using SACLA. This attracted Professor Faenov, who wanted to further develop his field of expertise, the X-ray spectrometer, with SACLA.

Professor Faenov has been involved in research observing complex changes in substances with high-accuracy X-ray spectrometer that he developed at a ultra-fine level. His results drew attention from many countries and he conducted joint research at research institutes in Japan, the UK, and the U.S. However, he says, "There are no other X-ray free electron laser facilities like SACLA except the one at Stanford University in the U.S. With SACLA, one can observe a nano world beyond the limit of the capabilities of conventional X-ray laser devices. We can remove certain electrons in an atom and make it a unique atom and observe its behavior in detail." This unique atom may be one that exists not on the earth, but in the universe. It's possible to make such a substance.
Furthermore, with SACLA, one can take X-rays at a short shutter speed of negative 10 to the 15th power.  It is faster than a molecular change so it's possible to take a photo of the onset of a change in various substances, for example, the moment when the cellular metabolism starts.

Professor Faenov, of the Institute for Academic Initiatives' Division of Photon Science and Technology (Division 8), has also had contact with researchers and students at Professor Kodama's laboratory. When asked about his impressions of Kodama Laboratory and its students, Professor Faenov said, "Kodama Laboratory has members from my country Russia as well as Europe, too, so it has an international and friendly atmosphere."  He praised students by saying, "Students are excellent not only in research quality, but also in presentation skills. Even undergraduate students are able to explain their research in a concise and easy-to-understand format."

He is also impressed with students' good teamwork. Since research using SACLA is conducted for 24 consecutive hours for three to four days, students work in shifts. When doing so, students take the initiative in sharing their work load with others and taking over their work. "Students always think how to achieve maximum results within a limited time and share their feelings with others." Regarding this, Associate Professor Norimasa OZAKI at Kodama Laboratory, the leader of research activities using SACLA, added, " Since many research projects are conducted using large-scale experiment facilities at Osaka University, students must have learned naturally how to work as a team. It's a culture at Osaka University."

Enchanted with Japan and its Variety of Cultures

We also asked Professor Faenov about his impression about Japan. Including the years he worked at the Kansai Photon Science Institute (KPSI), Japan Atomic Energy Agency (JAEA), he has been in Japan for eight years. "Nature in Japan is wonderful and people are kind. I'm enchanted with the variety of cultures that take root in Japan. It's fun to visit museums featuring their regional uniqueness."  Moreover, he thinks Japanese people are good at creating innovation in their daily life. He says pleasantly, "Compared with 20 years ago when I first came to Japan, French breads have become very delicious. Now in the Kansai region, some bakeries bake breads that are even better than authentic French breads." (laughs)
Professor Faenov, who hopes to serve as a bridge between Russian and Japanese researchers, gave a message to young researchers, saying, "The important thing for students is to have curiosity. I want them to act with curiosity and be always creative. What they accumulate through knowledge they inherit from their predecessors depends on them. I want them to learn many things and accumulate them flexibly and creatively."

In 1973, while he was in Moscow State University, he worked as a researcher at the Russian Academy of Sciences Lebedev Physical Institute. In 1977, he obtained a doctoral degree in physics and mathematical science. In 1979, he became a researcher at the Physical Institute, Academy of Sciences of the USSR. In 1984, he was awarded the title of Senior Scientific Researcher, the highest academic degree in Russia, and assumed the position of the head of the Laser Measurement Department in the Physical Institute. In 1990, he assumed the presidency of the Multicharged Ions Spectra Data Center of VNIIFTRI. In 2007, he became a researcher at the Kansai Photon Science Institute (KPSI), Japan Atomic Energy Agency (JAEA). In 2014, he took up a professorship at the Osaka University Institute for Academic Initiatives.