Hydrogen, a next-generation clean energy carrier, is anticipated to be used for fuel cell vehicles as an alternative to solid fuels. For its practical use, it is necessary to produce low-cost electrodes as replacements for those made from precious metals such as platinum (Pt).

Scientists have actively performed research and development of alternative materials to expensive Pt, materials that allow for high hydrogen evolution reaction (HER) performance, by using 2-dimensional materials with a single atomic layer.

A team of researchers from Tohoku University, Osaka University, and the University of Tsukuba focused on the edge structure of graphene, a single-atomic-layer material, exploring the possibility of improving its activity by fabricating holey graphene with chemical dopants. In particular, it was expected that the edge structure of graphene, which has high catalytic ability, would show high electrochemical reactions.

Because it was mathematically suggested that edge structure of graphene consisting of a single carbon atom could host chemical dopants, they fabricated geometric frustration to the graphene lattice by introducing dopants, namely, nitrogen (N) and phosphorous (P).

Using a scanning electrochemical cell microscopy (SECCM) technique with the highest spatial resolution and density functional theory (DFT) calculations, the team demonstrated that the fabricated structure and chemical dopants drastically enhanced HER performance, which was close to that obtained by Pt. They showed that NP codoping and the edge structure of graphene enhanced HER activity.

This team presented a path to efficient hydrogen production by electrodes made from low-cost non-metal materials. This is a promising basic technology for HER to enhance catalyst activity and realize metal-free, low-cost production of hydrogen for a sustainable hydrogen society. Combining renewable energy and water electrolysis will accelerate research and development of basic production technology of hydrogen energy carriers for this hydrogen society. 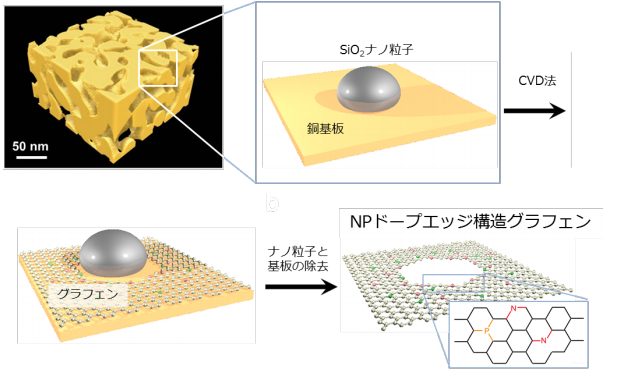 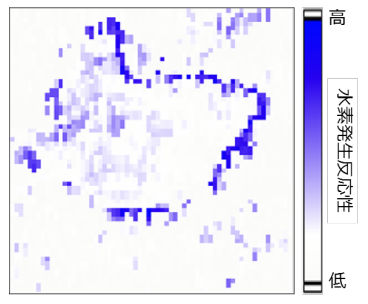