A team of researchers from The University of Tokyo, Osaka University, and the National Institutes for Quantum and Radiological Science and Technology focused on serine hydroxymethyltransferase (SHMT)-catalyzed retro-aldol reaction, developing fluorescent and 19 F NMR molecular probes. They can be used for detecting activity of SHMT that is related to diseases, such as cancer and malaria.

SHMT, an enzyme that catalyzes the reaction that converts serine to glycine, plays a critical role in one-carbon metabolism. The serine-glycine reaction catalyzed by SHMT is used for synthesis of nucleic acids and proteins necessary for cell proliferation. For this reason, it is thought that SHMT is an effective target for drug development against rapidly proliferating cells, such as cancer and microorganisms.

SHMT expression correlates with tumor growth and prognosis of tumors, drawing attention as a biomarker and drug target. In addition, malarial SHMT has been considered a suitable target enzyme of the malaria parasite. However, because molecular probes responsive to SHMT were not developed, methods for visualizing enzymatic reaction of SHMT have been sought after.

By focusing on the SHMT-catalyzed retro-aldol reaction rather than the canonical serine–glycine conversion, the team solved the spatial restriction of the SHMT substrate recognition site, developing fluorescent and 19 F NMR molecular probes.

Folate-mediated one-carbon metabolism is a fundamental cellular process that transfers one-carbon units to multiple biochemical pathways; however, SHMT also catalyzes a THF (tetrahydrofolate)-independent retro-aldol reaction, which does not use folate, that is, there is enough space in the substrate binding site.

Thus, they developed probes through the THF-independent pathway by introducing a fluorescent or 19 F containing atomic moiety at the β-position of serine in order to use the folate binding site.

Their research results will be helpful in understanding the physiological function of SHMT and diagnosis of diseases. By optimizing the structure of the new two candidate inhibitor compounds to SHMT, these results will also lead to the development of new drugs for treating malaria and cancer. 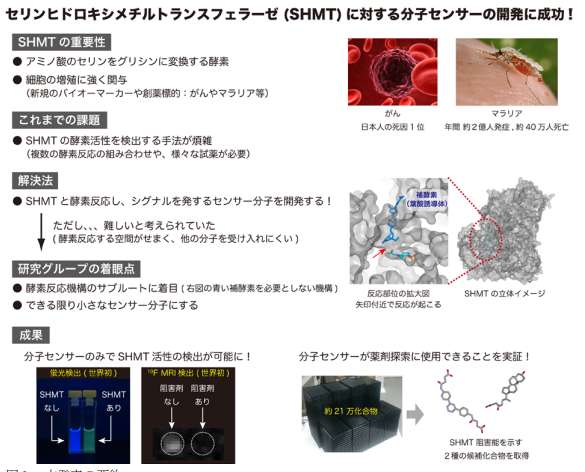 
This article, “Design Strategy for Serine Hydroxymethyltransferase Probes Based on Retro-Aldol-Type Reaction” was published in Nature Communications at DOI: https://doi.org/10.1038/s41467-019-08833-7 .