TMAO and urea molecules are osmolytes that affect osmosis in biological cells. With retention of high concentrations of urea and TMAO, the bodily fluids of marine animals have the same level of osmotic pressure as the surrounding seawater. In addition, TMAO and urea greatly influence proteins in cells. While urea destabilizes proteins and kill cells, TMAO stabilizes the structure of proteins unless it increases too much.

In biological cells, TMAO and urea co-exist at a ratio of 1:2 (TMAO:urea), and it was thought that these two types of molecules bonded with each other. Individual molecules (de-)stabilize by interacting with proteins, but TMAO-urea compounds do not interact with proteins. For this reason, it was thought that this TMAO-urea counteraction offset each other’s deleterious effects on proteins.

This group examined how this TMAO-urea counteraction happened. It was thought that the oxygen atom of TMAO was hydrogen-bonded to the hydrogen atom in urea, but it was pointed out that TMAO and urea didn’t hydrogen-bond.

This group studied intermolecular interaction using both theory and experiments. Because molecules in water move very fast, it is very difficult to examine the state of bonding between TMAO and urea dissolved in water. Thus, the researchers examined how these molecules bonded using computer simulations with high accuracy and precision. In order to find supporting evidence for their theoretical discovery, they performed measurements using polarization-resolved femtosecond infrared pump-probe spectroscopy and nuclear magnetic resonance spectroscopy, comparing the measured results with results of theoretical calculations. Agreement between measurements and computer simulations suggested unfavorable H-bond conformation of TMAO and urea in water.

In addition, the researchers also revealed that a hydrophobic part of, not an oxygen atom in, TMAO bonded to urea. That is, it was found that when TMAO and urea in marine fish cells were present with proteins in the surrounding area, they didn’t deactivate proteins by strongly bonding with each other, but they maintained protein functions in seawater while maintaining a balance between stabilization and destabilization of proteins.

This group clarified the interaction between TMAO and urea in water at a molecular level, which will become key to understanding the role of these two molecules as chemical chaperons: that is, how they perform their normal biological functions to maintain protein functions. In terms of synthetic biology, it is anticipated that the molecular level understanding of interaction between TMAO and urea will promote the development of artificial chaperones and contribute to next-generation medical treatment.

Trimethylamine N-oxide (TMAO) and urea are both osmolytes found in many marine animals, yet they show opposite effects in (de-)stabilizing proteins. Gaining molecular-level insights into the TMAO-urea interaction in aqueous solution is a key step in elucidating their biological roles. Here, combined ab initio molecular dynamics simulations, polarization-resolved femtosecond infrared pump-probe spectroscopy, and nuclear magnetic resonance spectroscopy reveal that the hydrophobic interaction between TMAO and urea is favorable in comparison with the hydrogen-bonding interaction. The association of the hydrophobic methyl group of TMAO with urea is driven by the large mismatch between the strong TMAO-water hydrogen bond and the weak urea-water hydrogen bond. Our observations provide a rationale for the counteraction of osmotic pressure resulting from urea by TMAO. 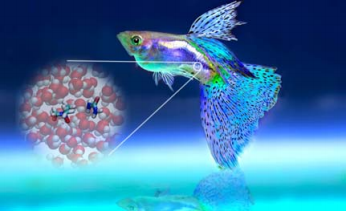 
The article, "Large Hydrogen Bond Mismatch between TMAO and Urea Promotes Their Hydrophobic Association," was published in Chem at DOI: https://doi.org/10.1016/j.chempr.2018.08.020