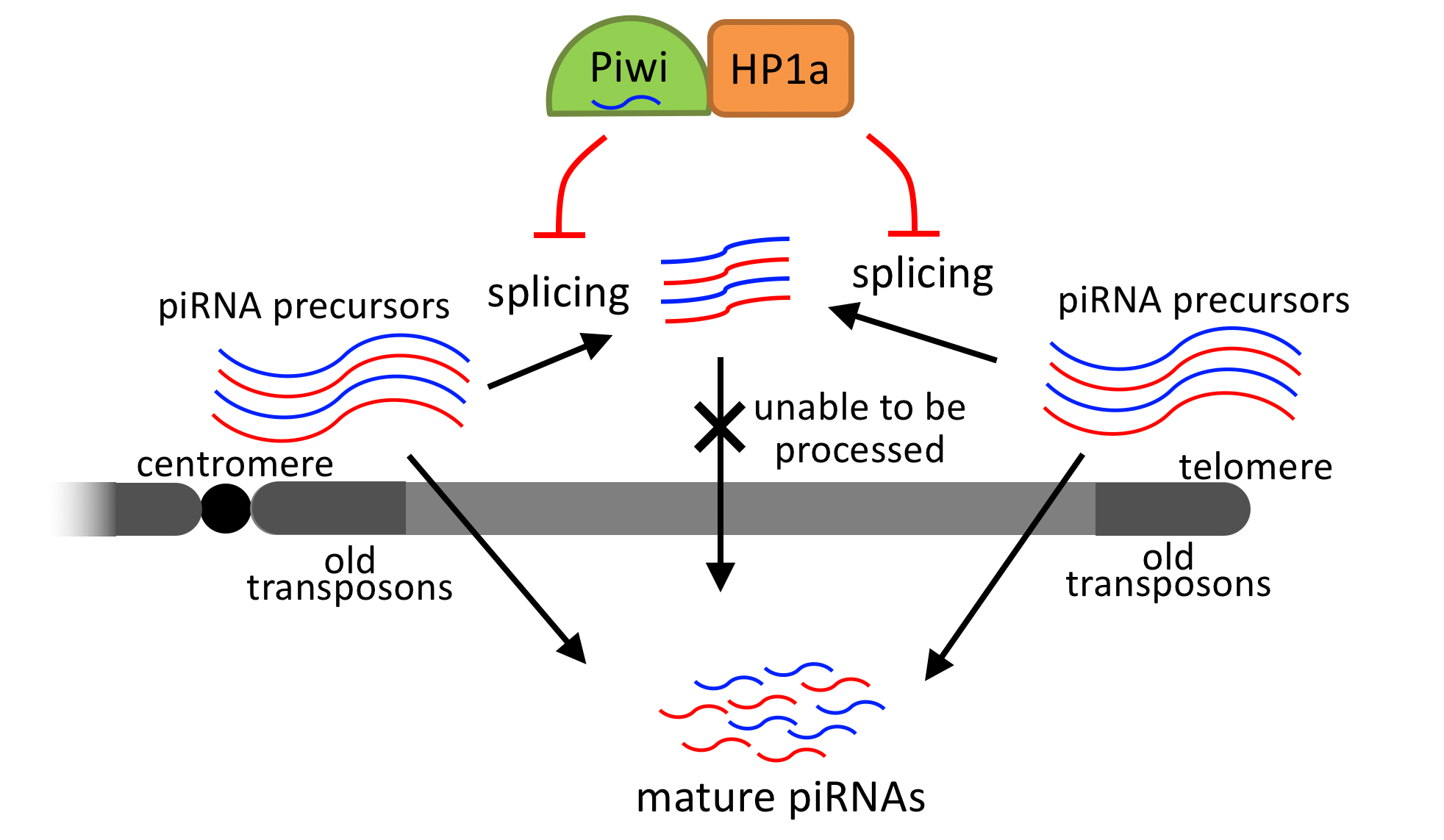 Though they occasionally play a role in animal development, transposons, also known as “jumping genetic elements,”  are in fact DNA sequences that have the potential to move to new positions within the genome. They constitute a large portion of the genome in the majority of eukaryotes, and their mobilization in the genome of the gametes--eggs and sperm– poses a threat to genomic instability, thus leading to infertility.

In animal germline cells, a specialized small RNA-based defense system, termed the Piwi-interacting RNA (piRNA) pathway, is primarily responsible for the suppression of transposon, a process known as “silencing.” In the field of genetics, Drosophila (fruit fly) has been a very useful model system for studying the mechanistic details of the piRNA pathway. Elucidation of such details will be valuable in understanding disease development and progression. One important discovery is that piRNAs are loaded onto the protein Piwi, the founding member of the piRNA pathway, and translocate into the nucleus. The Piwi–piRNA complex serves the purpose of silencing transposons.

Piwi has been proposed to function with downstream partners, and one of them is the heterochromatin Protein 1a (HP1a), which reportedly enforces transposon silencing in the Drosophila germline and ovarian somatic cells. However, the effects of HP1a depletion from the germline on the piRNAs and piRNA pathway proteins have not previously been studied, causing a gap in the understanding of the HP1a functions associated with the piRNA pathway.

In their latest study, reported in Nature Communications , an international team of researchers from Temasek Life Sciences Laboratory, National University of Singapore, Nanyang Technological University, and Osaka University shed light on the function of HP1a in the piRNA pathway and transposon repression.

Using a combination of genetic, biochemical, and next generation sequencing experiments, the team led by Toshie Kai discovered HP1a function in the germline cells. The study reveals that HP1a is specifically required for repression of transposons residing in the regions close to telomeres and centromeres. HP1a helps in production of piRNAs from regions close to telomeres and centromeres by protecting the longer precursor RNAs, which are diced into small piRNAs to silence the transposons.  Importantly, HP1a functions for repression of transposons at specific regions in genomes where evolutionarily-old transposons are populated.

The findings suggest that small RNA pathways have evolved in modular ways to keep transposon activities in check, not to accumulate in the genome during evolution, hence paving the way for studies to address the dynamics of small RNA-based immune systems in genome defense during evolution. Understanding this highly adaptive genome defense mechanism is also important after an increasing number of studies have highlighted their roles in disease.

To learn more about this research, please view the full research report entitled "Heterochromatin protein 1a functions for piRNA biogenesis predominantly from pericentric and telomeric regions in Drosophila " a t this page of Nature Communications .