A group of researchers from Osaka University studied proliferation and breeding methods of jojoba, a drought-resistant and profitable plant, and found that jojoba would allow for profitable desert afforestation. ( Figure 1 )

In afforestation projects in the past, emphasis has been put on planting trees, so fast-growing trees with low utility value, such as poplar, were planted. However, in many cases, after aid to afforestation was cut off, forests were regarded as useless and left unused or cut down by local people for fuel.

Thus, the Plant Bioengineering for Bioenergy Laboratory, Graduate School of Engineering, Osaka University (SEI CSR Foundation Endowed Chair) focused on jojoba as a plant genetic resource for afforestation. Jojoba, with its high drought resistance and salt tolerance, is prized as a material for great cosmetics and is purchased at a high price. However, good varieties of jojoba have neither been developed nor widely prevalent, so stable harvest has not been ensured, resulting in low production.

This group developed a tissue culture method for obtaining more clones than in the past by changing a combination of plant hormones to add in order to efficiently perform cloning of good female strains. Also, the researchers established the first genetic transformation procedure in jojoba by using agrobacterium for breed improvement, and developed DNA markers as indices for screening.

Based on results of this study, the Osaka University venture company Simmond Co. Ltd., was established in April 2017 for stable production of jojoba in the desert and sale in Japan. Jojoba oil is scheduled to go on sale in October 2017. ( Figure 2 )

The sale will become the first step toward the continuous ‘conversion to forests by agriculture’ in the future. This will lead to continuous afforestation in Egypt, effective utilization of wide unused desert, creation of employment of local people, cultivation of new industries using jojoba oil, and strengthening of the relationship between Egypt and Japan. 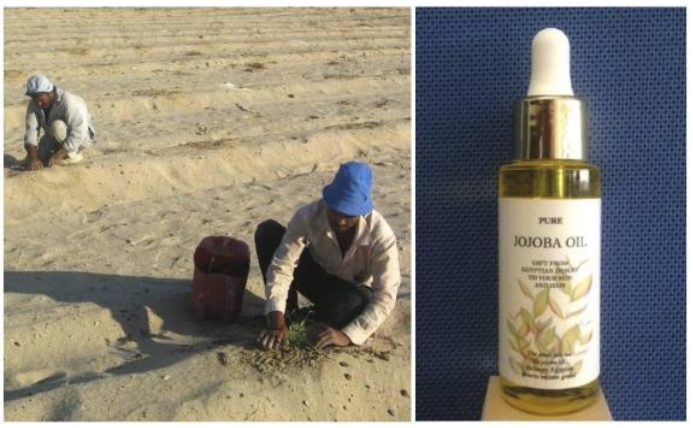