A step towards the clarification of molecular mechanism for HGF signaling

A group of researchers led by Professor KATO Yukinari, Associate Professor KANEKO Mika , and Assistant Professor OGASAWARA Satoshi at the Graduate School of Medicine, Tohoku University, jointly with a research group led by Professor TAKAGI Jun-ichi and Specially Appointed Assistant Professor UMITSU Masataka at the Institute for Protein Research, Osaka University, and a research group led by Professor MATSUMOTO Kunio and SAKAI Katsuya at the Cancer Research Institute, Kanazawa University, succeeded in creating monoclonal antibodies against Hepatocyte growth factor (HGF), which is deeply related to treatment of amyotrophic lateral sclerosis (ALS) and the progression of cancer.

HGF is a protein discovered in Japan, and by binding to Met, or hepatocyte growth factor receptor (HGFR), HGF causes biological activity such as cellular proliferation, survival promotion, or migration. As HGF promotes the survival of motor nerves, another group of researchers from Tohoku University and Osaka University is conducting clinical trials aiming for treatment of ALS by using HGF. Furthermore, abnormal activation of Met receptors is involved in the progression of cancer. Thus, the development of inhibitors targeting Met and antibody medicines for inhibiting HGF-binding to Met is being promoted.

First, this group produced HGF proteins of non-cleaved form (precursor) and cleaved form (matured form) by making artificial cleaved sequences in the cleaved site of HGF proteins. Then, the group succeeded in generating 6 kinds of anti-HGF monoclonal antibodies with different binding sites and inhibitory effects on activation by making use of these HGF proteins. These antibodies include t8E4 that recognizes the difference in structures, that is, a HGF precursor or a matured form of HGF protein (the two-chain state or the single chain state), and t1E4 that inhibits activation of antibodies and Met.

This group succeeded in producing an antibody that can specifically recognize active matured HGF alone and an antibody that inhibits activation. Structural analysis using these antibodies will lead to the clarification of a molecular mechanism necessary for activation of HGF signaling.

HGF-Met signaling contributes to various biological events by controlling cell migration. Since the abnormal activation of Met receptor causes cancer progression, inhibitors such as neutralizing antibodies are regarded as promising therapeutics. HGF is secreted as a single-chain (sc) precursor and is processed by extracellular proteases to generate disulfide-bonded two-chain (tc) HGF. Although this proteolytic processing of HGF is necessary for its biological activity, exactly how the proteolysis leads to the conversion of HGF to the active form is still unclear due to the lack of structural information. In order to gain insights about this point, we generated 6 antibodies against HGF. All antibodies recognized different epitopes on the native HGF protein and showed distinct effects when tested in a cell-based HGF-Met signaling assay. They included one antibody (t1E4) that strongly blocks Met activation by tcHGF, as well as one antibody (t8E4) exclusively recognizing the active tcHGF but not inactive scHGF. Thus, a panel of anti-HGF antibodies suitable for probing the structural mechanism of HGF activation were obtained. 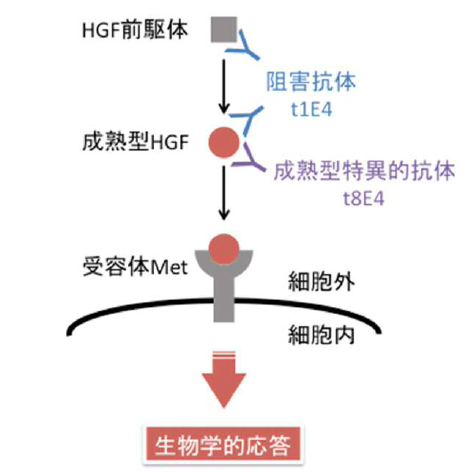 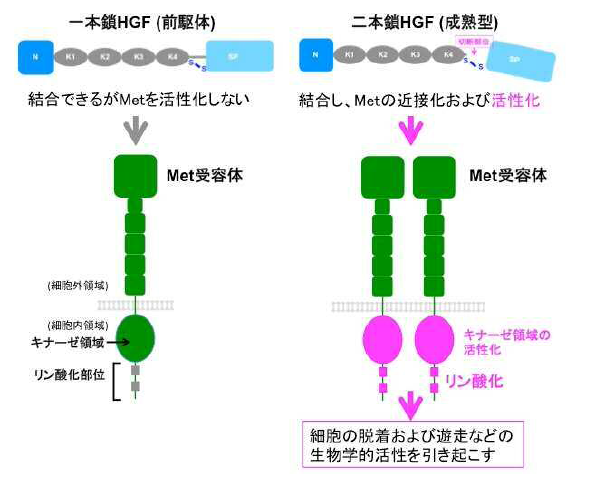 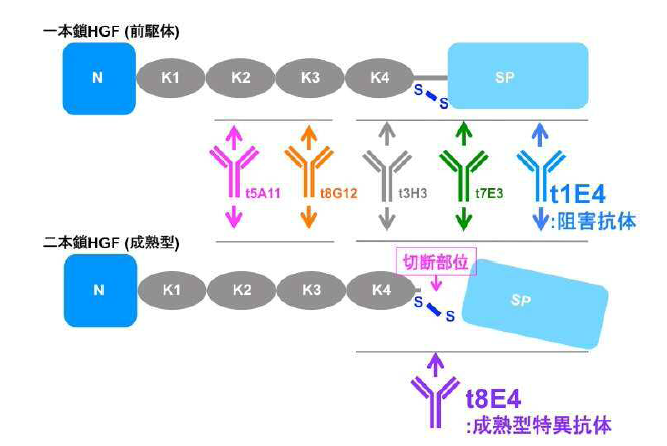 To learn more about this research, please view the full research report entitled “ Probing conformational and functional states of human hepatocyte growth factor by apanel of monoclonal antibodies ” at this page of the Scientific Reports website.