A group of researchers from Ritsumeikan University, Nagoya University, and Osaka University revealed that principle structures involved in photochemical energy conversion apparatuses are common. The pigment-associated photosynthetic protein, photosystem I (PS I), in higher plants and algae produces highly reducing power (NADPH) which is needed for carbon dioxide fixation, using solar energy. This PS I is known to have evolved from the photosynthetic apparatus in green sulfur bacteria which appeared 3 billion years ago. A special pair of chlorophylls is essential for the initial charge separation reaction in order to produce highly reducing power. Local protein structures, which surround the special pair, have to be kept without great changes in the long evolutionary history of photosynthesis during 3 billion years.

The research group also succeeded in making mutant proteins in green sulfur bacteria with a novel genetic modification technique, although their structural analyses have not been progressed so far.

It is a great advance that the principle to construct basic structures of photosynthetic apparatuses has been clarified. This principle can be applied to the development of an artificial photosynthetic system by mimicking the initial charge separation reaction, such as in some devices to recover generated electrons, in an efficient way.

Homodimeric photosynthetic reaction centers (RCs) in green sulfur bacteria and heliobacteria are functional homologs of Photosystem (PS) I in oxygenic phototrophs. They show unique features in their electron transfer reactions; however, detailed structural information has not been available so far. We mutated PscA-Leu688 and PscA-Val689 to cysteine residues in the green sulfur bacterium Chlorobaculum tepidum; these residues were predicted to interact with the special pair P840, based on sequence comparison with PS I. Spectroelectrochemical measurements showed that the L688C and V689C mutations altered a near-infrared difference spectrum upon P840 oxidation, as well as the redox potential of P840. Light-induced Fourier transform infrared difference measurements showed that the L688C mutation induced a differential signal of the S-H stretching vibration in the P840 + /P840 spectrum, as reported in P800 + /P800 difference spectrum in a heliobacterial RC. Spectral changes in the 13 1 -keto C=O region, caused by both mutations, revealed corresponding changes in the electronic structure of P840 and in the hydrogen-bonding interaction at the 13 1 -keto C=O group. These results suggest that there is a common spatial configuration around the special pair sites among type 1 RCs. The data also provided evidence that P840 has a symmetric electronic structure, as expected from a homodimeric RC.

Figure 1: The 3D structure of photosystem I which produces highly reducing power (NADPH) (Left side). The detailed structure around a special pair of chlorophylls, P700, in photosystem I (Right side). Only a one side (PsaA side) ligating with the special pair is shown. The amino acid residues, Phe676, His680, Thr742 and Thr743, in photosystem I were predicted to correspond to PscA-Leu617, -His621, -Leu688 and -Val689, respectively, in the photosynthetic apparatus of green sulfur bacteria, based on sequence comparison with each other. Mutations of PscA-Leu688 and -Val689 to cysteine residues induced the S-H stretching vibration band and the band shift of keto C=O in a chlorophyll molecule, strongly indicating very similar environments to those in photosystem I. 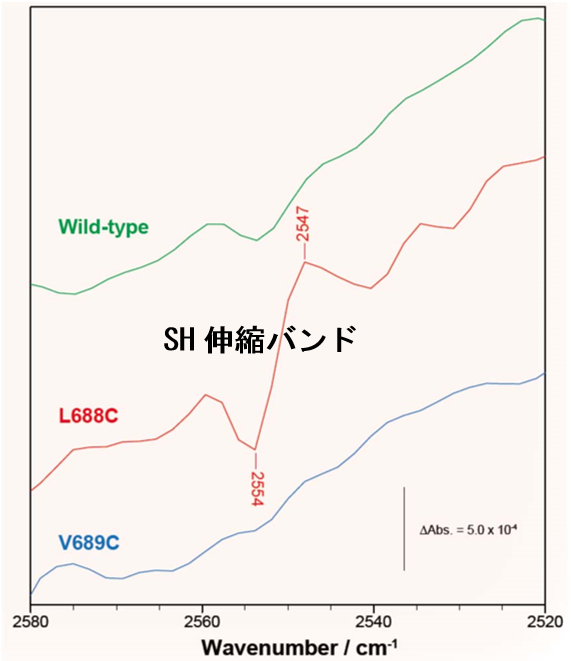 Figure 2: Light-induced FTIR spectra of mutant proteins (L688C and V689C) in which PscA-Leu688 and -Val689 in green sulfur bacteria were substituted to cysteine residue, respectively. The S-H stretching vibration band detected in L688C indicates a de novo formation of hydrogen bond network with a special pair.

To learn more about this research, please view the full research report entitled " Mutation-induced perturbation of the special pair P840 in the homodimeric reaction center in green sulfur bacteria " at this page of the Scientific Reports website.