A polymer hydrogel developed by this group --modified with both β-cyclodextrin ( βCD) and 2,2′-bipyridyl ( bpy) moieties-- "βCD–bpy gel," has shown responsiveness to metal ions. The CD-bpy gel demonstrated responsiveness to metal ions and showed selective adhesion ability based on molecular recognition in CD. In the absence of metal ions, as the hydrophobic bpy was included in CD, molecular recognition in CD was suppressed, resulting in adhesion not taking place in host-guest interactions. However, in the presence of metal ions, as ions reacted to bpy and hydrophilic bpy was released from CD, molecular recognition was expressed and adhesion was demonstrated to the guest gel, tertiary butyl group (tBu gel).

This group's research in controlled chemical adhesion through host-guest interactions by independent chemical stimuli using metal ions was, to the best of our knowledge, a world first. This group's new technique for precisely controlling adhesion between objects will be utilized in many applications in various fields, including soft robotics and biomaterials.

Common adhesives stick to a wide range of materials immediately after they are applied to the surfaces. To prevent indiscriminate sticking, smart adhesive materials that adhere to a specific target surface only under particular conditions are desired. Here we report a polymer hydrogel modified with both ​ β-cyclodextrin (​ βCD ) and ​ 2,2′-bipyridyl (​ bpy ) moieties (βCD–bpy gel) as a functional adhesive material responding to metal ions as chemical stimuli. The adhesive property of βCD–bpy gel based on interfacial molecular recognition is expressed by complexation of metal ions to ​ bpy that controlled dissociation of supramolecular cross-linking of βCD–bpy. Moreover, adhesion of βCD–bpy gel exhibits selectivity on the kinds of metal ions, depending on the efficiency of metal–bpy complexes in cross-linking. Transduction of two independent chemical signals (metal ions and host–guest interactions) is achieved in this adhesion system, which leads to the development of highly orthogonal macroscopic joining of multiple objects. 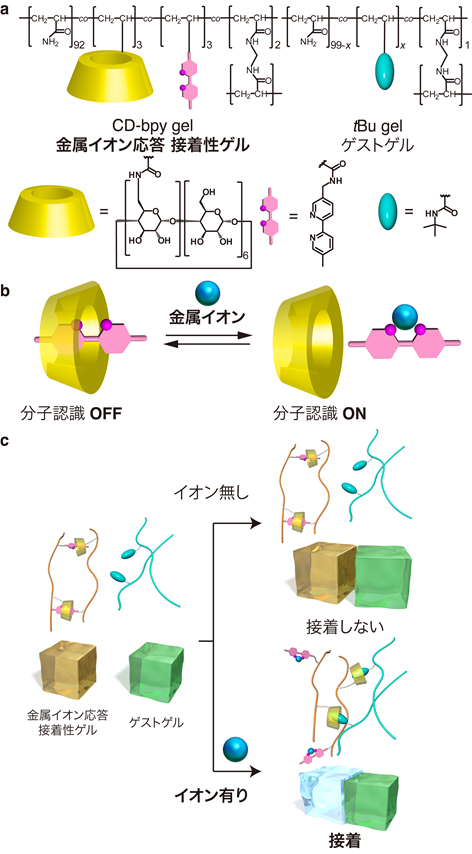 To learn more about this research, please view the full research report entitled " A metal–ion-responsive adhesive material via switching of molecular recognition properties " at this page of the Nature Communications website.